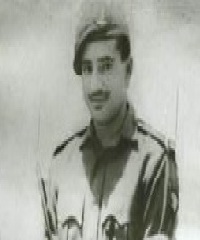 Place of Birth: Fatehpur, UP

On 21 September 1965, the 3 Jat battalion was given the task of capturing enemy positions in Dograi village in Pakistan. The A company led by Major Asa Ram Tyagi advanced on Sept 21, to capture the eastern edge of Dograi, which was well defended by one enemy company with tanks, recoil-less guns and pillboxes. Major Tyagi after assessing the enemy deployment and available resources with him decided to press ahead with the forward-most platoon of his company.

While assaulting the enemy positions,  Major Tyagi was hit by two bullets in the right shoulder. But he continued to move ahead, directing his soldiers to fire.  Major Tyagi realized that the enemy tanks were the biggest threat to their advance and needed to be neutralized. Without caring for his personal safety,  Major Tyagi attacked two tanks with hand grenades and neutralized the crew members . Consequently the two enemy tanks were captured intact and a big threat was eliminated. However during the process, Major Tyagi was hit by three more bullets. Undeterred, he continued to advance along with his troops till he fell unconscious. Inspired by his heroism and exemplary leadership, his troops fought with double vigour and succeeded in capturing the objective.

Citation for the Maha Vir Chakra awarded to him reads:-

On the night of 21 September 1965, Major Asa Ram Tyagi personally led the leading platoon of a company of a Jat Battalion to capture an enemy position in Dogral village in Pakistan, which was defended by a troop of tanks, covering pillboxes and recoilless guns. While assaulting the enemy position, Major Tyagi was hit by two bullets in the right shoulder. In spite of his injury, he pressed on against the enemy tanks, personally destroyed the crew with grenades and captured two tanks intact. In this process he was again hit by three more bullets, but still continued to lead his company till he fell unconscious.

He was subsequently evacuated to a military hospital where he died. Greatly inspired by his conspicuous bravery, his men captured the objective.