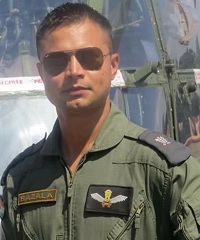 Major Arvind Bazala was born on 5th December 1987 in R.S.Pura in Jammu and Kashmir. He was the son of Mr. TR Bhagat who was working with Life Insurance Corporation (LIC) and Mrs. Santosh Devi Bhagat, an Assistant Manager, J&K Bank. Major Arvind, an alumnus of Sainik School Nagrota had got married in November 2015, with Aahana.

Major Arvind Bazala started his schooling from M.H.S DAV Nagbani School R.S. Pura and then joined Sainik School Nagrota in 1997 in 6th standard. In the early days of his life at Sainik School, he became popular owing to his friendly nature and good looks. He was an active sportsman and an excellent public speaker as well. He also represented his school and his state at the Republic Day Parade at New Delhi in 2001. He was also  appointed as the School Adjutant while he was in the 12th grade. Apart from his scholastic abilities and sportsman skills, he was also known for his melodious voice. He was an excellent singer, a terrific drummer, a great guitarist and a first-rate dancer. He was an all-round entertainer, lively and always full of life.

Major Arvind Bazala was gregarious  and loved to help others in need with a good balance between his personal and professional life. He loved to spend time with his friends and family. Also, he was passionate about traveling and photography and was an avid food lover too. Earlier, he had joined Armoured corps regiment as there was no vacancy in aviation at that time ,but later he got the opportunity to live his dad’s dream of flying an aircraft. He always wanted to do something really good for his village too. He was very proud of his younger brother Ankush and his usual text,”End Money Send Money” used to bring a smile on his face. His friend Sahil, who had met with an accident, shook him badly and he had prayed for his recovery throughout his treatment.

He was a self-motivated, enthusiastic and a consistent achiever. He joined NDA (National Defence Academy, Pune) on June 24th 2005 and passed out on May 31st 2008. Some of his achievements at NDA included, Cross-Country medalist throughout the six terms, member of academy’s Hockey and Cross-Country’s team, participant in Enduro-Cup, Adventure race scheduled over 3 days, Squadron Cadet Captain of “Bravo” Squadron and representing  NDA in the coveted Hexagonal Cup (Hockey).

He joined IMA (Indian Military Academy, Dehradun) on June 20th 2008 and passed out on June 13th 2009 having got commissioned as Lieutenant in 74 Armoured Regiment. Major Arvind was an achiever in his regiment and excelled in the training courses and sports activities. He had a technical bent of mind and did exceedingly well in Tank Phase of Young Officers Course, besides representing his Unit at Brigade & Division Level in Hockey and Cross-Country,competitions. Major Arvind being an amazing Singer and Drummer, was always a center of attraction in Army parties.

He was first posted at Chatha, Near R.S. Pura (J&K), followed by Patiala(Punjab) and then went on to do his Aviation Course to Allahabad (UP) for a year. At Allahabad , he was adjudged as the best army pilot and also participated in Republic Day Parade 2012 as Cheetah Helicopter pilot. After completion of the course, he joined Aviation unit at Nagrota (J&K) in 2013. Later he got transferred to Sevoke Road, near Siliguri, West Bengal in Feb 2016.

During 2016, Major Arvind Bazala was serving with  659 Army Aviation Squadron based in West Bengal. The unit was based in Sukna military base about 10 kms from Siliguri in Darjeeling district of West Bengal. On 30 Nov 2016, Maj Sanjeev Lathar along with his co-pilot Maj Arvind Bazala was tasked for an operational  mission along the eastern border. The missions undertaken by 659 Army Aviation Sqn usually included the information gathering by recce and observation of critical border areas for analysis by the Trishakti Corps HQs based at Sukna military base.

Maj Bazala took off for the mission as planned in the Cheetah helicopter. The Cheetah is a single-engine helicopter , of 1970s vintage and derived from the French Alouette. The mission was uneventful for the most part but when the helicopter was nearing to the base, it developed a technical snag. The engine malfunctioned at about 100 Ft from the ground and the aircraft lost control with the ATC. The helicopter crashed and Maj Sanjeev Lathar and the co-pilot Maj Arvind Bazala got severely injured, who later succumbed to their injuries. Major Arvind Bazala was an ace pilot and a committed soldier who laid down his life in the service of the nation.

An article, paying tribute to Major Arvind Bazala in The Tribune News paper:-

Major Arvind Bazala’s wife was yet to come to terms with the death of her husband but she managed to gather strength to inform her in-laws about the tragedy. The news shook the family and people living in the vicinity of their residence here as the Bazala family is quite renowned in the area. Major Arvind Bazala was quite famous among the villagers due to his good nature. His wife Ahana Bazala was in Siliguri, where he was posted, and was informed by the Army about his death there. It was due to his soft and sober nature that thousands of people bid a tearful adieu to the Army officer today when his mortal remains reached his native village for the last rites. Around 9.30 am today, Major Bazala’s mortal remains reached his home and by 12 noon the last rites were performed with full military honors. His whole family, father Ram Bhagat, a retired LIC agent, mother Santosh Devi, a bank employee, wife Ahana Bazala and younger brother Ankush Bazala, who is an engineering student, has been in a deep shock since Wednesday when he died in a chopper crash at the Sukna military camp helipad in West Bengal.“He was a loyal son of his parents and used to call home every evening to inquire about their well-being and about the studies of his younger brother. It was his wife who informed the family about his death, which brought a pall of gloom in the family”. The Major had last talked to his parents on Tuesday evening and inquired about the health of his father, who has not been keeping well for the past some time. “It was a routine for Arvind to call parents and he was quite concerned about his father’s health. He used to advise his mother and younger brother to take care of his father”. Major Arvind had visited his home in October to attend the marriage of one of his relatives and was happy with his life. “On November 14, he celebrated his first wedding anniversary in Siliguri, where he was posted and was happy with whatever he had achieved. Becoming a pilot was his childhood dream and when he didn’t manage to join the Air Force, he opted for the aviation wing after joining the Army”.

“We have lost a brave and dynamic officer and dear friend”.