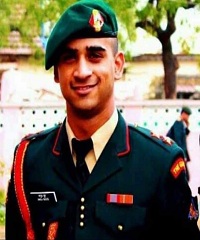 Maj Anuj Sood hailed from Kangra district in Himachal Pradesh, but the family later settled down in Chandigarh. Son of an army veteran Brig Chandrakant Sood and Smt Ragini Sood, Maj Anuj was born on 17 Dec 1989 in Air Force Command Hospital Bengaluru. He studied at Punjab Public School (PPS) Nabha and later got selected to join the prestigious NDA in the year 2008. Right from his childhood days, he always wanted to follow in the footsteps of his father(who served in the Corps of EME) and serve in the Army like him. His dream eventually came true and he got commissioned on 09 June 2012 from the Indian Military Academy. He was commissioned into 19 Guards of the Brigade of Guards, an infantry Regiment known for its gallant soldiers and numerous battle exploits.

After completing his training as a young Lieutenant he soon picks up field-craft skills while handling regimental duties in appointments like Adjutant and Platoon Commander. He got selected as Aide de Camp to General-Officer-Commanding 14 RAPID for a period of 13 months and performed exceptionally well in the appointment. He subsequently underwent the Junior Command Courses, at Army War College, Mhow, and did very well there too obtaining excellent grading. Maj Anuj later got married to Ms. Akriti Singh, a software engineer, hailing from Himachal Pradesh. After serving for few years with his parent unit, Maj Anuj was deputed in March 2018 to serve with 21 RR Battalion, deployed in J&K for counter-insurgency operations.

During 2020,  Maj Anuj Sood was serving with 21 RR battalion deployed in J&K. He was functioning as one of the Company Commanders of the battalion, which was engaged in counter-insurgency operations in its area of operation(AOR). As a number of militants were active in its AOR, the unit troops had to maintain a very high state of preparedness at all times and had to undertake operations at a short notice. Based on the information from the intelligence sources, about the presence of some hardcore militants in Wadarbala-Rajwara forests in Kupwara district, the security forces decided to launch a joint combing operation on 01 May 2020, comprising the elements of Army, CRPF and J&K Police. As planned the joint task force launched the operation on the morning of 01 May 2020, wherein the Army team comprised 21 RR troops led by Col Ashutosh Sharma. Besides the CO himself, the 21 RR team included the Maj Anuj Sood, Naik Rajesh Kumar, Lance Naik Dinesh Singh, and few more soldiers.

As Maj Anuj Sood along with his CO Col Ashutosh Sharma and other soldiers were returning from the massive combing operation in Wadarbala-Rajwara forests on 02 May 2020, the team received inputs that 2-4 terrorists had taken refuge in a house in the nearby Chanjimulla hamlet. As per the information received, the terrorists clad in combat uniform had taken a few civilians hostage in one of the houses. Maj Anuj Sood and his team immediately reached the site and swung into action. The terrorists were found to be hiding in two adjacent houses, who fired at the troops on being challenged.

A fierce gun-battle ensued thereafter lasting for several hours. During the drawn-out battle, Maj Anuj Sood and his men managed to eliminate two terrorists and also succeeded in extricating a number of civilians. However, during the heavy exchange of fire Maj Anuj Sood, Col Ashutosh Sharma,  Naik Rajesh Kumar, and Lance Naik Dinesh Singh got severely injured. They later succumbed to their injuries and were martyred. Maj Anuj Sood was a brave soldier and a fine officer, who led from the front and laid down his life at the age of 30 years in the line of his duty.

Major Anuj Sood was leading the men of his Company during `Operation Chanjimula’ on 02 May 2020. During the operation the officer laid the cordon at the suspected house with his Combat Action Team. Unmindful of his personal safety he along with the Commanding Officer and three other individuals moved inside the house to evacuate the civilians trapped inside and being taken as hostages by the terrorists. The Gallant officer in the ensuing fire fight with the terrorists showcased utmost grid, valour and bravery and made the supreme sacrifice by laying down his life in the finest traditions of the Indian Army and injured the terrorists with nefarious designs.