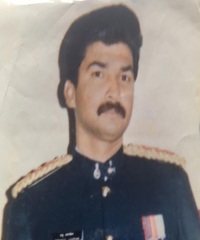 Major Anshoo Saxena hailed from Lucknow in Uttar Pradesh and was born on 06 Sep 1965. Son of Dr Ramesh Chandra Saxena and Smt Premlata Saxena, Maj Anshoo Saxena was second among three siblings with elder brother Amit Saxena and the younger brother Anadi Saxena. He completed his schooling from Christ Church College Lucknow and went to do his post graduation in Economics. As Maj Anshoo’s maternal grandfather had served in the Armed Forces, his mother always encouraged her sons to serve the nation in uniform. After his post graduation Maj Anshoo cleared the Combined Defence Services Examination and got selected to join the Army.

He was commissioned into 8th battalion of the Sikh Regiment, an infantry Regiment well known for its intrepid soldiers and numerous battle exploits. After serving for few years he got married to Miss Ruchi Raizada in the year 1995. He was affable, spirited, full of life and pursued diverse interests from cooking to singing. He was a keen sportsman too and specially excelled in playing cricket. By the year 1999, he had been promoted to the rank of Major and had evolved into an officer par excellence. As the Kargil war broke out in May 1999, Maj Anshoo’s unit got deployed in Drass region and became part of “Operation Vijay”.

During the Kargil war Maj Anshoo Saxena was functioning as a Company Commander under Col S P Singh as Commanding Officer. Maj Anshoo along with his unit troops crossed Zojila Pass on 12 May 1999 and reached Drass by 14 May to undertake operations. Maj Anshoo played a key role in capturing Point 4460 and also during subsequent operations for the capture of strategically important Tiger Hill. Maj Anshoo  proved his mettle as a soldier during these operations and undertook various challenging tasks as part of the unit’s operational plans. After the end of ‘Op Vijay” he was later deputed to serve with 6 RR battalion deployed in J&K for counter insurgency operations.

During June 2001, Maj Anshoo Saxena was serving with 6 Rashtriya Rifles battalion deployed in Kupwara district of J&K. The AOR(Area of Responsibility) of the battalion was infested with militants and the troops had to maintain a very high state of alert at all times to be ready for operations at short notice. Thus the unit was engaged in operations against the militants on a regular basis. One more such operation was planned on 22 June 2001  based on the information from the intelligence sources about the presence of some hard core militants in Vilgam village in Kupwara district. Maj Anshoo Saxena was tasked to lead that operation. As planned Maj Anshoo Saxena along with his soldiers reached the suspected area and launched the search and cordon operation.

As the operation was underway the troops made contact with the militants, who fired at them on being challenged. As a result a fierce gun-battle ensued thereafter lasting for several hours through out the night. Maj Anshoo Saxena and his comrades managed to eliminate three militants during the operation. However during the heavy exchange of fire, Maj Anshoo Saxena received multiple gun shots and got seriously injured. He later succumbed to his injuries and was martyred. Maj Anshoo Saxena was a valiant soldier and determined officer who led from the front and laid down his life in the line of his duty. He was given the gallantry award, “Sena Medal” posthumously for his conspicuous bravery, leadership, devotion to duty and supreme sacrifice.