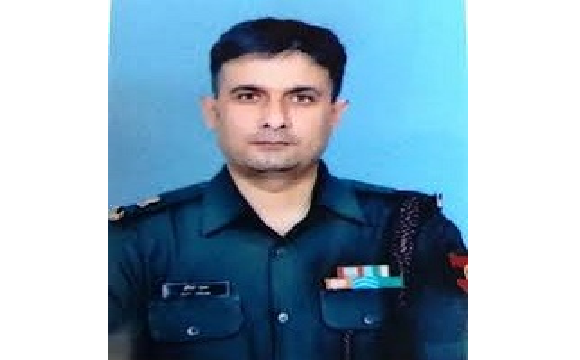 Major Amit Sagar was born on 02 May 1994, in a military family and followed the family tradition of serving in the Armed Forces. Son of an Army veteran Major Satish Chandra Mathur, Maj Amit Sagar followed into the footsteps of his father and joined the Army. He was commissioned into the Mahar Regiment, an infantry regiment known for its gallant soldiers and various battle honours. After serving for nearly two years in Delhi he was posted to High Altitude Warfare School, at Sonmarg in J & K area in 2017. Major Sagar was to be promoted to the rank of Lieutenant Colonel in May 2017.

Maj Amit Sagar besides being a tough soldier was affable and a family man. A board outside his flat explained the bond he shared with his family members. “Happiness is homemade. Families are like fudge. Mostly sweet with few nuts,” it read.

During Jan 2017, Maj Amit Sagar was serving with 115 Infantry battalion deployed in Ganderbal district of J&K. There was heavy snowfall in J & K area in Jan 2017, resulting in multiple avalanches in Jammu and Kashmir. The Chandigarh-based Snow and Avalanche Study Establishment had warned of avalanches in Jammu and Kashmir and Himachal Pradesh in the last week of Jan 2017. The first avalanche hit Gurez on the 25 of January morning, in which a family of four civilians had died. The second took place around the same time in Sonmarg, chiefly a tourist area, where an army camp was located.

The avalanche at Sonmarg hit the Army camp of the 115 Infantry Battalion at about 5:45 AM in central Kashmir’s Ganderbal district. The avalanche struck two shelters occupied by two officers and four other soldiers. As a result, the soldiers got buried under tonnes of ice. A massive rescue operation was launched by the army and one officer and four soldiers were rescued and sent to the hospital for treatment. However owing to prolonged exposure to extreme cold, Maj Amit  Sagar’s condition had deteriorated and he could not be saved. A soldier at heart and an officer par excellence, Maj Amit Sagar laid down his life in the service of the nation.