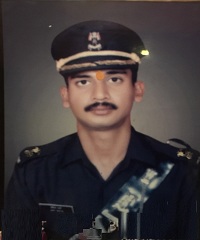 Major Amit Rathi hailed from Rai Bareilly in Uttar Pradesh and was born on 02 Nov 1974. Son of Shri JS Verma and Smt Pushpa Verma, Major Amit Rathi did his graduation in Economics. Later he got selected for the Army and joined SS 68 course at the Officers’ Training Academy Chennai. He was commissioned into 49 Armd Regt of the Armoured Corps, one of the crucial combat arms of Indian Army.

After serving for a couple of years, he got married to Ms Anjela and the couple had a son Yash in the year 2002. He served in various operational areas and took part in numerous operations including Op Vijay and Op Rakshak. After serving with his parent unit for some time, Maj Amit Rathi was later deputed to serve with 53 RR battalion deployed in J & K for counterinsurgency operations.

During the year 2005, Major Amit Rathi ’s unit was deployed in the Budgam district of Jammu and Kashmir and was engaged in operations against the terrorists on a regular basis. On 12 Jan 2005, Maj Rathi’s unit received information from the intelligence sources about the presence of some hardcore militants in its area of responsibility in Budgam district of J & K. It was decided to launch a search and destroy operation under the leadership of Maj Rathi to deal with the threat of the suspected militants.

On 13 Jan 2015, Maj Rathi reached the suspected area along with his troops and launched the cordon and search operation. Soon the troops made contact with the militants who fired at them on being challenged. in the gun battle that ensued, Maj Rathi killed one militant and quickly redeployed his troops to block the possible escape route for other militants. However, during the continuous exchange of fire Maj Rathi got hit by bullets and was severely injured.  Later he succumbed to his injuries and was martyred. Maj Amit Rathi was a valiant soldier and a fine officer, who laid down his life in the service of the nation. Major Amit Rathi was given the gallantry award, “Sena Medal” posthumously, for his courage, unyielding fighting spirit and sacrifice.