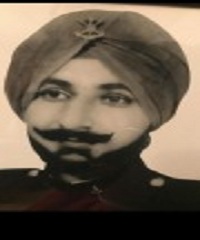 Major Amarjit Singh was commissioned on 11 June 1961, into 20 Lancers, an Armoured Regiment of the Armoured Corps of Indian Army. Son of Dr Hakam Singh and Mrs .Lajwanti, Maj Amarjit Singh was 3 years old when his father passed away. He was brought up by his brother, Major General Dalbir Singh, who later commanded the 9th Infantry Division and played a key role in liberation of ‘Jessore’ during 1971 war. Maj Amarjit Singh, besides being an excellent sportsman and an athlete, had keen interest in photography and calligraphy. He was gregarious, affable and a person of cheerful disposition who brought happiness wherever he went. He loved to live big, laughed a lot and would be forever remembered by friends and family members as an affectionate and committed man.

Maj Amarjit Singh participated in 1965 war as a Captain, when 20 Lancers operated under the command 10 Infantry Division. Pakistan’s surprise attack on 1 September, fell on 191 Infantry Brigade, which was supported by ‘C’ Squadron of 20 Lancers under Maj Bhaskar Roy. The armoured attack comprised two regiments of M-48 Pattons and M-36 Sherman B-2 tank destroyers but was strongly resisted. During the initial phases of the attack, the ‘C’ Sqn of 20 Lancers destroyed 6 Pattons, 3 recoil-less guns and captured a jeep. A second attack was launched by Pakistani armour at 1100 hours and repulsed by the AMX-13s of 20 Lancers, which despite being outgunned and outnumbered, destroyed a total 13 tanks that day and prevented the encirclement of 191 Infantry Brigade. Maj Amarjit Singh as Quartermaster played a key role during the operations and honed his field craft skills, which were put to good use in the 1971 war.

During Aug 1971, Maj Amarjit Singh was moved to 72 Armoured Regiment which remains the youngest armoured regiment of the Indian army ever blooded in war. During 1971 war, 72 Armd Regt was deployed in the western sector to thwart the advance of Pakistani forces. The Regiment was part of 10 Division of  15 Corps deployed in the Chhamb sector of J & K. In 1965, the Pakistanis had succeeded in capturing Chhamb with a surprise attack and in 1971 too, it was their one of the main objectives. 10 Division, under Major General Jaswant Singh, was deployed for the offensive and was fairly well-equipped, having four infantry brigades, two regiments of armour (9 Horse and 72 Armoured Regiment), two Engineer regiments, six regiments of artillery (two medium, three field and one light), besides elements of air defence and the usual ancillary units.

On 4 December, the enemy forces attacked many Indian positions with armour and infantry in Chhamb sector. On the Dewa-Ghopar axis, in the North, six Pakistani tanks were knocked out , however, by midday, Mandiala North had fallen. That day several localities South and South-West of Chhamb were also overrun or ordered to withdraw. Later a squadron of 72 Armoured Regiment was placed under 191 Brigade and the para commando group and a troop of 9 Horse were deployed on the Eastern side of the Mandiala Bridge to block the enemy’s advance towards Jaurian. To retake Mandiala North, 7 Kumaon and a squadron of 72 Armoured Regiment were ordered forward from Akhnoor (68 Brigade). The battle continued for many days thereafter with 72 Armoured Regiment playing a vital role in the overall operations.

However, Maj Amarjit Singh while displaying grit, determination and gallantry, was martyred during the operation on 06 Dec. Maj Amarjit Singh was a valiant soldier and a committed officer, who led from the front like an inspiring military leader. He laid down his life in the service of the nation, following the highest traditions of the Indian Army. Maj Amarjit Singh is survived by his wife Mrs Jasjiwan Kaur, who currently heads the War Widows Association of India, daughter Jasjit Kaur, and son Rocky Singh.