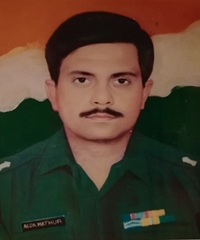 Major Alok Mathur was born on 14th  Sep 1969 in a military family of Capt R S Mathur and Smt Madhu Mathur. Owing to the frequent postings of his father, Maj Alok studied in various places including Panchmadhi in Madya Pradesh and Jammu in J&K. Later he joined the Sainik School at Chittorgarh where the foundation of his training in the armed forces was laid. Subsequently, he joined the prestigious NDA and Indian Military Academy (IMA) at Dehradun and was commissioned into the Corps of Engineers in the year 1990.

After passing out of IMA as a young lieutenant he got posted to the unit, deployed in Kupwara district of J & K.  In a short span of time he honed his field craft skills and evolved into a dedicated soldier and a fine officer. He then got married to Pragati in the year 1994 and the couple had two sons. In the following years he underwent the commando course and also gained his Bachelor of Engineering degree from the College of EME(CEME) in Pune. He also had the distinction of being sent on deputation to Afghanistan two times as part of Indian Army contingent. In the year 2001, he got promoted to the rank of Major and later got posted as commanding officer of a unit in Arunachal Pradesh.

During 2003, Maj Alok Mathur was commanding 85 RCC unit deployed in Arunachal Pradesh. The unit was located in a very remote and inaccessible area as necessitated by its operational role. Maj Alok Mathur and his troops faced challenging situations on a regular basis as the area was infested with militants engaged in anti national activities. The soldiers of the unit had to exercise maximum caution while moving from one place to another as the army convoys were vulnerable to attack by militants. Maj Alok Mathur and his men had to face one such attack on 07 Oct 2003 while moving to an operational location in Kameng area.

In a pre-planned move eight militnats attacked Maj Alok Mathur and his soldiers with automatic weapons. The heavily armed militants using the thick foliage of the jungle attacked the troops from vantage points. Though it was a surprise attack, Maj Alok quickly assessed the situation and swung into action by deploying his troops for giving a befitting reply. A fierce gun battle ensued thereafter and during the exchange of fire Maj Alok Mathur got injured in his right hand. Though bleeding profusely Maj Alok continued leading from the front and directing fire till he collapsed. He was airlifted to the nearby Army hospital but he succumbed to his injuries. Maj Alok Mathur was a committed soldier and led from the front like a true military leader during the operation.

Capt R S Mathur and Madhu Mathur, parents of Major Alok Mathur SM paid tribute to their son on his “Day of Martyrdom” on 07 Oct 2019…..
Our joys knew no bounds when we were blessed with a son on 14th Sep 1969. He was so lovely and cheerful that his presence would light up all faces around; so he was named “Alok” meaning “Brilliance”. True to his name he grew up to be a “Brilliant” boy, excelling in academics as well as sports.
We felt really proud when he qualified for an admission to Sainik School Chittorgarh and then followed it up a few years later with selection into the prestigious NDA. He continued to show his “Brilliance” after joining the army too and also got trained as a commando. Courage, came to him naturally and we saw that trait on many occasions while he was growing up. One such incident we remember quite often; when as a young boy he decided to travel alone from Jammu to Chittorgarh after his school vacation as none of us could accompany him due to other commitments.
We were very proud of his courage and commitment to the service but had no inkling that these attributes would one day take him away from us. While serving in Kamang district of Arunachal Pradesh, Alok was martyred displaying outstanding courage and commitment to the service during an operation against anti-national elements.
Alok was the brightest star of the family and would remain so as long as we live. At times we miss him terribly but our faces brighten up and hearts swell with pride when we get recognized by the people as parents of “Maj Alok Mathur”. We hope that our “Alok” with his “Brilliance” will continue to be the guiding light for millions of young Indians for a long time to come…
Capt R S Mathur(Father) and Madhu Mathur(Mother)