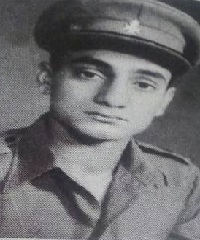 Major Abdul Rafey Khan hailed from Rampur district in Uttar Pradesh and was born on 08 Oct 1931. Son of Shri Abdul Karim Khan, Maj Abdul Rafey Khan studied from Sherwood college Nainital in the present day Uttarakhand. He joined the Army and was commissioned as a second Lieutenant on 30th December 1951 at the age of 20 years. He was commissioned into 8 Garh Rif battalion of the Garhwal Rifles Regiment, an infantry Regiment known for its intrepid soldiers and a glorious history of numerous battle exploits.

By the year 1965, he had put in over 13 years of service and had been promoted to the rank of a Major. By then he had served in various operational areas and developed into a battle hardened soldier and a fine officer who believed in leading from the front. As the war clouds were gathering in 1965, Maj Abdul Rafey Khan’s unit got deployed in the western sector to check any misadventure by Pakistani forces.

During the 1965 war with Pakistan, Maj Abdul Rafey Khan’s unit 8 Garhwal Rifles was part of 43 Lorried Brigade of 1 Armoured Division. Maj Abdul Rafey Khan was functioning as Second-in-Command of the battalion with Lt Col JE Jhirad as the ‘Commanding Officer’.  On 08 Sept, the brigade crossed the border and advanced along the Majuna Channi, Gangial, Kaloi and Phagowal axis in the Sialkot sector. On 16 Sept , Maj Khan’s battalion along with two squadrons of 17 Horse was poised to attack Chawinda. However, at the last minute, the plan of a direct assault on Chawinda was shelved because recce reports indicated that the terrain as well as the layout of the town afforded a natural anti-tank defence.  It was then decided to first capture Butur Dograndi to disrupt the enemy line of communication ie., the Chawinda to Pasrur road, to facilitate the capture of Chawinda. 8 Garhwal Rifles along with a squadron of 17 Horse, was given the task and the attack was to be carried out in broad daylight.

It was a daring attack, launched by day at 1230 hours. However during the attack Lt Col JE Jhirad, the Commanding Officer, got seriously wounded by heavy enemy shelling. Regardless of fatal injuries, he grabbed the blooded Royal Rassi (lanyard) in his hand and whispered the last words, “Nothing can be nobler and finer than to die for this”. The loss of the CO at such a critical juncture was shocking for the unit but undeterred pressed on the attack under the dynamic and inspiring leadership of Maj Abdul Rafey Khan, the Second-in-Command. By 2 pm, the battalion reached the forming up place but due to intense enemy shelling, it was dispersed widely in small groups. Suddenly, there was a lull in the shelling. Maj Khan sensed it was a heaven sent opportunity to seize the objective. But the battalion was widely dispersed and all signal communication had broken down. He could not communicate with his company commanders, and hence he himself mustered the nearest platoon and charged at the objective. Seeing this, the other sub-units also followed suit and a fierce hand-to-hand combat ensued. The leading companies managed to get a foothold on the objective and held onto it for over two hours. The enemy launched a fierce counterattack and managed to evict our troops.

Maj Khan again assaulted the objective with ferocity and determination and forced the enemy to abandoned the position. The battalion captured the objective and immediately reorganized itself. The enemy was not to sit quiet for long. It immediately brought in tanks to encircle the battalion and subjected it to intensive air strikes, followed by heavy artillery shelling. Maj Khan then moved his tanks between Jassoran and Butur Dograndi but the squadron of 17 Horse could not link up on the objective. He then ordered the battalion to occupy a defensive position towards north of Buttur Dograndi.

Beginning at 0745 hours on Sept 17 till the pull back was ordered, the enemy launched three ferocious counter-attacks with armour supported by artillery and air force. It was during one of these fierce enemy attacks that Rifleman Balwant Singh Bisht, armed with a rocket launcher, rushed forward on advancing enemy tanks and knocked out one of them and, in the process, laid down his life. The battalion, entrenched well behind the enemy lines, was expecting link-up by own armour any moment. But at that time the higher military command appreciated that link-up/reinforcement was not prudent. The battalion was, thus, ordered to pull out, as best as it could. Maj Khan along with a handful of men, the Regimental Medical Officer and the Intelligence Officer stayed back to evacuate casualties. However, unfortunately Maj Khan got fatally wounded by an enemy gunshot while personally loading the casualties into a tank.

Maj Abdul Rafey Khan was a committed soldier and a determined officer who led from the front like a true military leader. He was given the gallantry award, “Vir Chakra” for his dauntless courage, leadership. fighting spirit and supreme sacrifice.

Citation for the ‘Vir Chakra’ awarded to him reads:-

On the 17th September, 1965, Major Abdul Rafey Khan was commanding a battalion of Garhwal Rifles which had captured village Butur Deograndi to the west of Chawinda and taken up a defensive position on the near side of the village. The enemy made a strong counter – attack with tanks. Major Khan personally directed the fighting and his battalion repulsed the attack with heavy losses to the  enemy. In the evening , when his battalion was ordered to withdraw, Major Khan remained in position along with the  Regimental Medical Officer and personally carried and evacuated the casualties. While doing so he was hit by an enemy shell and was killed.

In this action, Major Abdul Rafey Khan displayed exemplary courage and devotion to duty and made the supreme sacrifice of his life.