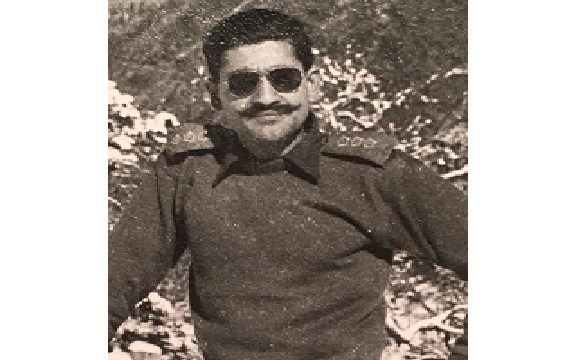 Major Arjan Kumar Kanal was born in Karachi, Sindh in undivided India and later his family moved to New Delhi during the partition time. He was commissioned into the 4 Para battalion of the Parachute Regiment, an infantry Regiment known for its fearless soldiers and numerous daredevil operations. By the year 1971, he had been promoted to the rank of Major and had developed into a tough soldier and fine officer, who commanded the respect of his troops. By then he had served in various operational areas and gathered substantial field experience to undertake challenging operations.

During Dec 1971 Maj Arjan Kumar Kanal’s unit 4 Para was deployed on the western border in Rajasthan. Indo-Pak war of 1971 ended on 16 Dec 1971 with a decisive victory for Indian forces on the eastern front. Despite the cease-fire, Pakistani forces took a provocative step of occupying a Sand Dune in Nagi village located in Sri Karanpur Tehsil in Sri Ganga Nagar district of Rajasthan. The enemy forces had occupied the Indian territory probably with an intention to embarrass the Indian Army and avenge to a small degree the humiliation they had suffered in the war. 4 Para (SF) under the command of 51 (Independent) Para Brigade of the Indian Army was tasked to evict the enemy forces and regain control of the area. It was decided to launch the attack with the elements of 4 Para, 9 Para field regiment, and 410 field company on 27 Dec 1971. Maj Arjan Kumar Kanal was part of the team of 4 Para battalion that was assigned the task of evicting the enemy.

Maj Arjan Kumar Kanal and his troops of 4 Para continued their advance and finally succeeded in reclaiming the Nagi Sand Dune by 6 am on 28 Dec 1971. However, during the fierce battle, the 4 Para battalion suffered many casualties. Maj Arjan Kumar Kanal, Maj KJ Singh, 2nd Lt VRYR Dubbal, and 18 other soldiers later succumbed to their injuries and were martyred. Besides the three officers, the other fallen brave-hearts included Hav Tek Bahadur Gurung, Lance Hav Bala Ram Gurung, Hav Partap Singh, Nk Ganga Datta, L/Nk S Chellaiah, Ptr VD Varkey, Ptr Anand Singh, Ptr Anand Singh Bisht, Ptr Babu Ram, Ptr Bhim Bahadur Thapa, Ptr Gajendra Singh, Ptr Gaur Singh, Ptr Joseph PT, Ptr Kamlesh Kumar, Ptr KP Udayan, Ptr Pritam Ram, Ptr Tej Singh and Gnr VP Maran. Maj Arjan Kumar Kanal was a valiant soldier and gritty officer who led from the front and laid down his life in the line of his duty. A Nagi war memorial, “Shaurya Sthal” has been erected at Nagi village to honour the martyrs of the Nagi battle. The Army commemorates ‘Nagi Day” every year in the memory of gallant soldiers who laid down their lives for the nation during the famous Battle of Nagi on 27-28 December 1971.