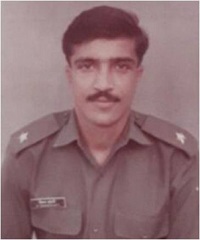 Maj Viney Choudhary was born on January 18, 1968 and hailed from Mangalpur village in Jind district of Haryana. Son of Shri Zile Singh and Smt Santosh Singh, Maj Viney excelled in academics during his school days. Though his father wanted to him to become a professor, Maj Viney nursed the idea of joining the Armed Forces as there was no soldier in his family. He continued to follow his dream and consequently got selected to join the Army after his graduation from Government College Jind. He joined IMA Dehradun for his training and was commissioned an an officer at the age of 21 years on 15 Dec 1990.

He was commissioned into the 13th Battalion of the Punjab Regiment, an infantry Regiment well known for its intrepid soldiers and numerous battle exploits. It was a proud moment for his parents as he achieved the rare distinction of being the first person from his village to become a commissioned officer in the Army. By the year 1999, he had been promoted to the rank of a Major and had served in various operational areas in his over nine years of service.

Maj Viney Choudhary’s battalion 13th Punjab was inducted into the Pulwama District of J &K in 1998 for anti-militancy operations. Within three months of its induction into the Kashmir valley, the battalion established a good network with locals to understand the modus operandi of militants. Pulwama district, east of Pir Panjal in Kashmir valley, despite being away from Line of Control (LOC), had been engulfed in militancy since the time it raised its ugly head in the Valley in the late ’80s. As a result the unit troops had to maintain a very high state of alert at all times and undertook operations against the militants on a regular basis.

On April 29, 1999, 13 Punjab Bn which had developed an intricate intelligence network in and around Pulwama district in Kashmir Valley, received a reliable input from the intelligence sources about the presence of militants in Takia village. As per the information the Police had cornered a dreaded terrorist, Iqbal Gujjar who was allegedly involved in an operation wherein Lt Atul Katarya from the unit was martyred in Oct 1998. Based on the inputs it was decided to launch an operation to neutralize the terrorists under the leadership of Maj Viney Choudhary. As planned Maj Viney Choudhary reached the suspected area along with his comrades and established a tight cordon around the clusters of houses by 3 pm.

By excellent marksmanship, Maj Chaudhary shot down one militant who was firing at the cordon. In the ensuing firefight, Maj Chaudhary crawled to a position of advantage under covering fire from his men and shot down the second militant. However Maj Chaudhary while inching forward for the third militant, received a gunshot wound in his right thigh. But undeterred Maj Chaudhary charged towards the house and shot the third militant at point-blank range. But in the firefight, he too was fatally injured and later succumbed to his injuries before he could be given any medical aid. Maj Chaudhary was a gallant soldier and a gritty officer who led from the front and laid down his life in the line of his duty. He was given the gallantry award, “Shaurya Chakra”, posthumously for his cold courage, leadership and supreme sacrifice.

According to his parents, he considered all terrorists to be his personal enemies. “Whoever is my country’s enemy, is my enemy”, recalls his mother Smt Santosh as her son had told her. His wife Smt Pratima, who would often receive threatening telephone calls from terrorists, used to plead with his parents to advise him to restrain himself. Instead, Maj Chaudhary would manage to convince his parents by saying: “Come what may, someone has to come forward”.

The citation for ‘Shaurya Chakra” awarded to him reads:

On April 29, 1999, Major Viney Chaudhary of the 13th Punjab Battalion, who had developed an intricate intelligence network in and around Pulwama district in Kashmir Valley, received a reliable input from the battalion headquarters about the presence of militants in Takia village. He was also tasked to conduct a cordon and search operation to flush out militants. The officer immediately led his column and established tight cordon around the clusters of houses by 3 pm. By excellent marksmanship, Major Chaudhary shot down the militant who was firing at the cordon. In the ensuing fire fight, Major Chaudhary crawled to a position of advantage under covering fire from his men and shot down the second militant. The officer, while inching forward for the third militant, received gunshot wound in his right thigh. Disregarding his injury, and sensing threat to his comrades, Major Chaudhary charged towards the house and shot the third militant at point blank range. But in the fire fight, he, too, was fatally injured and succumbed to his injuries even before his evacuation to the hospital.

During the encounter with the most dreaded militants, for his indomitable courage, dogged determination and inspirational leadership in the line of fire, Major Viney Chaudhary was awarded the Shaurya Chakra, posthumously”