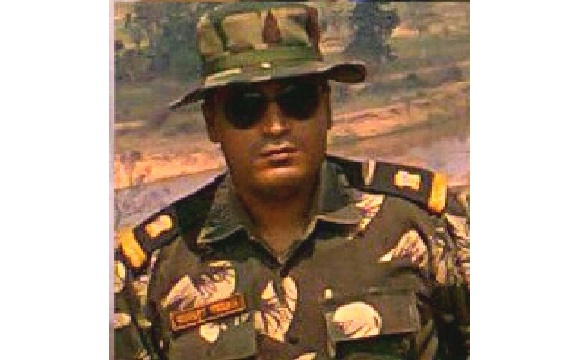 Place of birth : Allahabad (UP)

Major Vineet Verma hailed from Allahabad in Uttar Pradesh. He joined the army in the year-2006 and was commissioned into 19th Dogra Battalion of the Dogra Regiment, an infantry regiment known for its gallant soldiers and numerous battle honours. After completing his training, the young Lt Vineet Verma got posted to a field area and soon honed his field craft skills.

He served in various field areas thereafter and developed into a tough soldier and fine officer who believed in leading his troops from the front. In year 2006, he got married to Ms Ruchi from Bareilly and the couple had a son Akshat. By 2013, he had put in about 7 years of service and had been promoted to the rank of Major.

During 2013, Maj Vineet Verma’s unit 19 Dogra was deployed in Assam as part of Op Rhino and was engaged in counter-insurgency operations. The trouble surfaced in Assam with the student agitation in 1979 on the foreigner's issue. Violence continued intermittently till 1985 when the Assam Accord between the AASU (All Assam Students Union), Assam Gana Sangram Parishad (AGSP) and the Central Government was signed. Notwithstanding the accord, United Liberation Front of Assam (ULFA) demanded secession from the Union and started resorting to insurgent activities. The State of Assam was declared disturbed on 27 Nov 1990. Due to pressure of the Security Forces, ULFA agreed to a truce in Mar 1991, but renewed violence led to launching of "Operation Rhino" in Sep 1991.

Relentless Counter Insurgency Operations against ULFA forced the group to come to the negotiating table. The Peace Consultative Group (PCG) held three rounds of talks with Government of India (GOI) to facilitate direct talks with ULFA. The GOI responded favorably and suspended all offensive operations against ULFA with effect from 14 Aug 06. However, ULFA used the ceasefire period to consolidate military and financially. Consequently "Operation Rhino" was restarted with effect from 23 Sep 2006. The militancy affected areas of the state fell in the area of responsibility of Maj Vineet Verma's unit and thus the unit personnel had to maintain a high state of alert at all times.

As Maj Vineet Verma's patrtol team was traversing through their planned patrol route, the militants in a pre-planned move attacked the troops. Though the attack was sudden, Maj Vineet Verma and his troops swung into action to give a befitting reply. A fierce gun battle ensued thereafter with heavy exchange of fire. During this operation Maj Vineet Verma as well as Asst Cmdt Devesh Kulshreshtha got seriously injured. They later succumbed to their injuries and were martyred. Maj Vineet Verma was a valiant soldier and gritty officer, who laid down his life in the line of his duty. Maj Vineet Verma’s wife Smt Ruchi took the tragedy in her stride and decided to take his legacy forward by joining the army. Her dream finally came true on 14 Mar 2015, when she passed out of OTA Chennai as a commissioned officer of Indian Army.