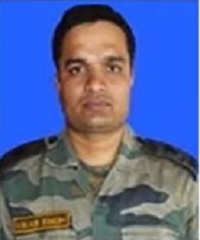 Place of Birth : Ghazipur, UP

Major Vikas Singh hailed from Tarighat village in Ghazipur district of Uttar Pradesh. Son of Shri Jitender Singh and Smt Saroj Devi, Maj Vikas Singh did his initial schooling from Kendriya Vidyalaya, but unfortunately he lost his father when he was barely 5 years old. He then joined the prestigious RIMC(Rashtriya Indian Military College) Dehradun from class VII. It is in this college where the foundation for his army life was laid. Thereafter he got selected to join the NDA and subsequently moved to IMA Dehradun.

He was commissioned into the Rajputana Rifles Regiment, an infantry regiment known for its valiant soldiers. After serving for few years, he got married to Ms Anchal Singh on 28th February 2018 and the couple had a daughter Vridhi born on 16 Dec 2018. After serving with his parent unit for a couple of years, Maj Vikas Singh was deputed to serve with 57 RR battalion, deployed in J & K for counter insurgency operations.

During April 2019, Maj Vikas Singh’s unit 57 RR (Rashtriya Rifles) battalion was deployed in Kupwara District of J & K. The unit was operating along the  Line of Control (LOC) and was engaged in operations against the militants on a regular basis. On 13th April 2019, the security forces received credible information from the intelligence sources about the presence of group of terrorists in Machil sector of Kupwara district. Based on the intelligence inputs, it was decided to launch an operation to neutralize the threat of terrorists. Maj Vikas was assigned the task of leading that operation.

As planned, Maj Vikas and his troops reached the suspected area and launched the search and cordon operation. The area was located at upper Kumkadi forests in North Kashmir and was dotted with dangerous slopes, gorges and slippery terrain. Owing to the treacherous terrain, the soldiers had to exercise extreme caution while  carrying out the search operation. Maj Vikas was continuously directing his men to tighten the cordon to corner the hiding terrorists. While doing so at one point Maj Vikas saw one of his soldiers in a precarious condition. Maj Vikas lunged forward to save the soldier but in doing so lost his balance and slipped. As the area had a steep gradient, Maj Vikas fell down the hill sustaining serious injuries to his head and chest. He was initially shifted to military hospital Drugmulla from where he was later referred to 92 base hospital at Badami bagh Cantonment, Srinagar. However he later succumbed to his injuries and was martyred.

Maj Vikas Singh was a gallant soldier and a fine officer who led his troops from the front like a good military leader. He is survived by his mother Smt Saroj Devi, wife Smt Anchal Singh and daughter Vridhi.