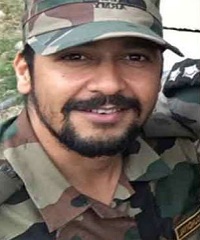 Maj Vibhuti Shankar Dhoundiyal hailed from Dehradun in Uttarakhand and was born on 18 Dec 1987. Son of Shri OP Dhondiyal and Smt Saroj Dhondiyal, Maj Vibhuti Shankar Dhoundiyal had three sisters and was the youngest among his siblings. Maj Vibhuti’s father as well as grandfather had worked in the office of Controller Defence Accounts. Maj Vibhuti studied from St Joseph Academy Dehradun and later completed his graduation from DAV college at Dehradun. He was very keen to join the Armed Forces right from his childhood and continued to pursue his dream while studying. Soon after his graduation, he cleared the Combined Defence Services Examination and got selected to join the Army. He was commissioned on 18 Sep 2011 into the Corps Electronics and Mechanical Engineers (EME), a branch of the Indian Army, responsible for design, development, trial, inspection and refit of weapon systems and equipment.

As a young Lieutenant, he was sent on attachment to an infantry unit 17 Mahar, deployed at Nangi Tekra in Krishna Ghati sector of Poonch district in J&K. He soon honed his field craft skills and evolved into a committed soldier. After his tenure in J&K along the LOC, he served in varous Army formations in Rajasthan, Pune and Secundrabad. He also underwent a number of training courses from 2013 to 2017 at various Army Institutes, which equipped him with the knowledge of military tactics and leadership.  After serving for a few years with his parent Corps, Maj Vibhuti in the year 2018, was deputed to serve with 55 RR Battalion, deployed in J & K for counterinsurgency operations. Maj Vibhuti intially functioned as Officer Commanding of Field Repair Increment (FRI) of EME, but later took over as Company Commander of Delta company of 55 RR battalion. Maj Vibhuti later got married to Ms Nitika Kaul belonging to a Delhi-based Kashmiri family on 19th April 2018.

The assault team was being led by Brigadier Harbir Singh himself and Maj Vibhuti was part of the team. The operation was launched in the night of 17 Feb with fog and poor visibility conditions making the matters worse. At around 1 AM, Maj Vibhuti and his QRT members reached the suspected house and carried out an extensive search. Following a footprint trail, Maj Vibhuti and his comrades reached a cattle shed on the other side of the house. As they moved closer to the shed,  the terrorists opened fire. As Maj Vibhuti was leading the team, he bore the brunt of the attack and received multiple gun shots. Undeterred, Maj Vibhuti immediately swung into action and ordered his men to reorganize and attack. Despite being injured, Maj Vibhuti crawled forward and managed to eliminate one terrorist. In a desperate attempt to flee, the remaining terrorists threw a grenade which proved fatal for Maj Vibhuti and his valiant men. The injured soldiers were shifted to the Army Hospital but Maj Vibhuti and three of his comrades Hav Sheo Ram, Sep Ajay Kumar and Sep Hari Singh, succumbed to their injuries and were martyred. Maj Vibhuti was a valiant soldier and a fine officer who led from the front and laid down his life in the service of the nation, following the highest traditions of the Indian Army. Maj Vibhuti Shankar Dhoundiyal was given the gallantry award, “Shaurya Chakra” for his exceptional courage, devotion to duty, and supreme sacrifice.

Maj Vibhuti Shankar Dhoundiyal is survived by his mother Smt Saroj Dhondiyal, wife Smt Nitika Kaul Dhondiyal, and three sisters. Later carrying forward the legacy of her husband, Smt Nitika Kaul joined the Indian Army and was commissioned into the Army Ordnance Corps in May 2021.

Smt Nitika Kaul Dhoundiyal, wife of Maj Vibhuti Shankar Dhoundiyal paid tribute to her husband on his “Day of Martyrdom” on 18 Feb 2020…..
As we observe the first anniversary of my husband’s “Day of Martyrdom”, I am surrounded by thoughts of disbelief, pain, and emptiness. The treasured moments passed with him have now taken over the role of a support system that is gradually teaching me to pick up the pieces in life.
I often read my diary to revisit my earlier thoughts and bring Maj Vibhuti Shankar Dhoundiyal (Vibhu for me) back alive. My diary tells me that… when he was away serving in the field area, I would often wake up in the night to check any message from him. He would invariably come in my dreams smilingly and would hold me tight. I would beg him even in the dreams not to leave me alone. Those were the days I did not want to wake up and probably that was my way to escape from reality.
I know that with time, people accept the situation and move on, but for me, life can never be the same again as the “scar” of his absence has left an indelible mark on my psyche. I still remember the moments that took away parts of my soul. I lost a part when I first heard the news of his “Martyrdom” and another part when I had to sign documents, where his name was written as “Late Maj Vibhuti Shankar Dhoundiyal” and my name, had a title of “Widow”.
Besides being a committed soldier, Vibhu was a fabulous human being and taught me many things about life. I learned to be focused and understood the significance of being passionate in life and most importantly realized the importance of love. I had written a letter to him but by the time it was ready to be posted, it was too late. It indeed summarized my feelings for him….” Vibhu, I wish I can tell you how much I love you. Every day seems to be a new struggle but I can’t tell you about that. I know you are busy with your work and I don’t want to burden you with my worries. But honestly speaking I am quite scared at times. You are my life. When I look back I realize the importance of love. You have made me a different person. I miss the moments when you hug me and say hey Nikki I love you. I remember whenever I had nightmares you always hugged me tight saying” it is all, okay I am here love”. Just always keep me close. It seems so long since I saw you and am waiting for you to come home.Here I imagine a world for us. Vibhu, I am so proud of you and I love you”.
These days sometimes when I go to my balcony and look at the stars, I observe their brightness flickering randomly. However, this random pattern, gives me a feeling that Vibhu is trying to communicate with me. I wonder, if Vibhu is one of those stars and is engaged in narrating our love story to other stars. But I am very certain that wherever he is, he will make sure that others around him are always smiling.
I miss Vibhu, my soldier and my soul mate, but as a martyr’s wife I am committed to do everything that would have made him proud….my small contribution to the nation he loved and gave his life for….
Nitika Kaul Dhoundiyal