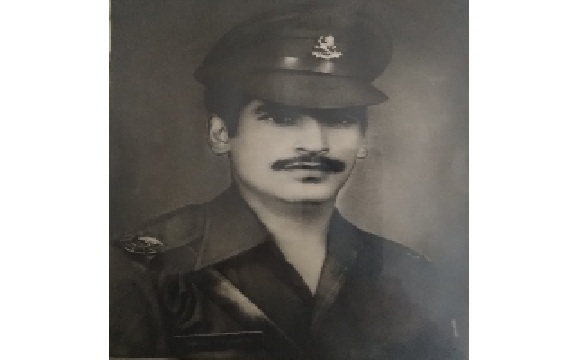 Place of birth : Sitapur (UP)

Maj Santosh Kumar Agnihotri hailed from Sitapur district of Uttar Pradesh and was born on 29 Nov 1958. Son of Shri PK Agnihotri, he did his schooling from Sainik School Ghorakhal in Uttarakhand. While studying in the Sainik School his inclination towards the Armed Forces grew and it was here that the foundation of his future military life was laid. His resolve to join the Army grew with age and consequently, he got selected for the prestigious NDA after finishing school. He later went to  IMA Dehradun and was commissioned as a Lieutenant at the age of 22 years. He got commissioned into 11 Kumaon of the Kumaon Regiment, an infantry Regiment well known for its dauntless soldiers and numerous battle exploits.

As a young Lieutenant, he got posted to J&K as his first assignment. He soon evolved into a committed soldier and a fine officer with superior field-craft skills. Besides being a tough soldier, he was very affable and caring which endeared him to his peers and subordinates as well. He went on to serve in the challenging areas of the North East and then went to Sri Lanka as well, as part of Indian Peace Keeping Force(IPKF). He also got selected to serve as an Instructor at IMA Dehradun and subsequently at Commando Training School Belgaum. He earned the nickname of 'Tarzan' from his comrades for being a 'go to man' in case of any eventuality. Later he was deputed to serve with 1 Assam Rif deployed in the North East for counter-insurgency operations. After putting in few years of service he got married to Ms. Anita and the couple had a son Akshat.

During Jan 1998, Maj Santosh Kumar Agnihotri was serving with 1 Assam Rif battalion deployed in Manipur for counter-insurgency operations. The unit was deployed in Tamenlong district of Manipur and was part of 'Operation Hifazat' being undertaken by the Army in Nagaland-Manipur-Arunachal Pradesh area. As the area of operation (AOR) of the unit was active with militancy, Maj Agnihotri and his troops had to maintain a high level of alert at all times and had to be ready for operations at a short notice.

On 11 Jan 1998, while moving from his location at Nungba to his battalion HQs at Aizwal, Maj Agnihotri noticed some insurgents trying to board a bus. Maj Agnihotri realized the potential danger to the lives of the innocent civilians in the bus and immediately swung into action. Without caring for his own safety, he moved swiftly and confronted the insurgents, making sure that the civilians were not harmed in any manner. The daring move by Maj Agnihotri created confusion and panic among the insurgents. In a retaliatory move the insurgents fired indiscriminately at Maj Agnihotri and his buddy. Maj Agnihotri received multiple gun shots and was seriously injured. In the meantime, the driver taking advantage of the confusion, drove the bus off thus saving the lives of many civilians. However Maj Agnihotri succumbed to his injuries and was martyred. Maj SK Agnihotri  was a valiant soldier and an officer par excellence, who laid down his life in the service of the nation.

Tribute by his Comrade:

It was in Indian Military Academy Dehradun in 1987 that I first came face to face with Capt SK Agnihotri. He was posted as Instr there to train the budding YOs of Indian Army . He was taking a class on service subjects and his method of instruction left an indelible impression on me. His Professional Knowledge,soft spoken & unassuming nature was an inspiration. Over the course of next six months had few interactions with him as a Guru & Shishya. The bond developed. When it came to Choice of Arms in addition to 4 and 13 Kumaon Filled up 11 Kumaon as one of the choice in Infantry ( First Choice) largely due interaction and inspired by his Personality as a Instr and Offr. As Fate ordained I was Commissioned into his Paltan 11 Kumaon.

It was in the unit that came to know about his Professionalism and humane nature. Unknown to us in the Academy then he was Best YO and Cdo QFI of his course. Adored by his men for his fairness and humane nature he would always guide the youngsters. We were Coy Cdrs together sometime later and also served as Instrs in JL Wing Belgaum at the same time in 1995-96 but to me he was always my instr . He was a man who would TRUST everyone and unfortunately this quality of brave officer resulted in his martyrdom in NE in 1998 wherein his Veh was signalled to stop by plain cloth Insurgents. Even then he fought bravely with bare hands before laying down his life. It was a Personal loss and yet to come to terms with . Rest In Peace Sir.  Miss You Always