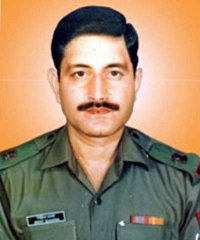 Major Rohit Sharma hailed from Jalandhar in Punjab. Son of a practicing doctor Dr Ved Vrat Sharma, he had two sisters as his siblings. He was very keen to join the Armed Forces right from his childhood and eventually joined the Indian army after completing his education. He was commissioned into 8 JAK LI of the famed Jammu and Kashmir Light Infantry Regiment, an infantry Regiment known for its brave soldiers and rich history of various battle honours.

After completing his training he joined his unit and soon learnt the field craft skills. He developed into a committed soldier and gritty officer who commanded respect of his juniors and seniors as well. He was an athlete and a keen sportsman with very pleasant demeanor which endeared him to all the unit personnel. After serving for sometime, he got married to Ms Nevedita in the year 1996.

During 1998, Maj Rohit Sharma’s unit 8 JAK LI was deployed in the Poonch district of J & K along the LOC with Col Satish Dua as its Commanding Officer. The LOC was highly active and volatile where ceasefire violations occurred very often and without any warning. It was also used by the terrorists for infiltration with the connivance of Pakistani security forces. The infiltration by the terrorists was invariably attempted under the cover of artillery fire or with the help of the Border Action Team(BAT). On 17 June 1998, the unit received information from the intelligence sources, about the presence of three hardcore terrorists in the village near to its Battalion HQs. Maj Rohit Sharma, who received the report immediately swung the QRT (Quick Reaction Team) into action. The commando platoon 'Ghatak" deployed a few kms away was also ordered to reach the suspected location.

Maj Rohit Sharma was a valiant soldier and a fine officer who led from the front and laid down his life in the service of the nation, following the highest traditions of the Indian Army. Maj Rohit Sharma was given the gallantry award, “Shaurya Chakra” for his exceptional courage, devotion to duty and supreme sacrifice. Maj Rohit Sharma is survived by his parents and two sisters.