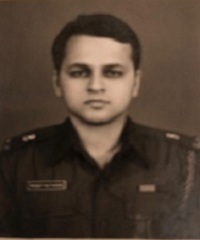 Maj Ranjit Muthana hailed from Madikeri taluk of Coorg district in Karnataka. Born on 29th July 1951, Maj Muthana completed his schooling from Don Bosco, Mumbai. He nursed the idea of joining the Armed Forces since his childhood and continued to pursue his dream after completing his schooling. Subsequently, he got selected for the prestigious NDA at Pune and earned his stars as a 2nd Lieutenant on 24 Dec 1972. He was commissioned into the famed Rajput Regiment, an infantry Regiment known for its fearless soldiers and numerous battle exploits. With its motto, “Sarvatra Vijay” meaning “Victory Everywhere”, the Regiment took part in all the wars since Independence and also formed part of the IPKF( 4, 5 and 25 Rajputs formed a part of IPKF in Sri Lanka).

Maj Muthana served with his battalion, 5 Rajput in Nagaland, Palampur, Suratgarh, Banbasa, and Sri Lanka. As a young Captain, he had the distinction of serving as an Instructor at NDA. Subsequently, he graduated from Defence Services Staff College at Wellington and was posted as Brigade Major of 167 Inf Bde from 1985 to 1987. Maj Muthana later got married to Geetha Aiyappa on 12 Nov 1978.

The IPKF launched its first operation on 9 October 1987 after formulating a multi-pronged strategy to take on LTTE. Code-named “Op Pawan”, it was expected to neutralize LTTE operational capability in and around Jaffna. This included the capture or neutralization of the LTTE’s chain of command, which was expected to leave the rebel movement directionless in the face of the impending assault on the LTTE strongholds by the IPKF. After the attack by the IPKF comprising soldiers of 13 Sikh LI, 4/5 GR, and 10 Para on Jaffna university on 12 Oct 1987, the relations with the LTTE reached the breaking point and their fighters launched a series of attacks against Indian soldiers. By Dec 1987, IPKF had wrested control of parts of Jaffna but the skirmishes were continuing in various parts. After the induction of Indian forces in Aug 1987, the militants were supposed to surrender but the dreaded LTTE backed out and unleashed war on Indian forces.

On Fateful day of 2nd Dec 1987, Maj Ranjit Muthana volunteered to undertake the convoy protection duty beyond his own area of responsibility despite fully aware of the Liberation Tigers of Tamil Elam (LTTE) threats. He was the column commander of the foot column which was escorting the convey on road to Batticaloa Colombo. When they were on the way to locate a consignment of weapons in the hideout of LTTE militants, a group of heavily armed LTTE militants attacked them. Maj Muthana and his soldiers had inadvertently walked into the militants’ hideout and were facing heavy firing from all directions.

Maj Muthana quickly assessed the situation and using his field craft skills swung into action along with his soldiers. Though the militants were heavily armed and were firing from vantage points Maj Muthana was determined to repulse the attack. A fierce gun battle ensued thereafter with a heavy exchange of fire from both sides. During the gun battle, Maj Muthana got hit by a direct MMG burst which pierced through his helmet. Maj Muthana later succumbed to his injuries and was martyred. In spite of being heavily outnumbered by the LTTE, Maj Muthana forced the LTTE militants to abandon their positions. Maj Muthana was a valiant and committed soldier who laid down his life in the line of duty, following the highest traditions of the Indian Army.