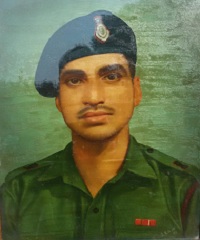 Major Puran Chander hailed Poonch in J&K and was born in the year 1936. Son of an Army veteran Lt Col Dina Nath, he always nursed the idea of serving in the Armed Forces since his younger days like his father. Eventually he joined the Army and was commissioned into 5 JAK Rif battalion of the Jammu and Kashmir Rifles Regiment, an infantry Regiment, well known for its fearless soldiers and various battle honours.

After serving for few years, he got married to Ms Mona Thakur in May 1964 and the couple had a son Keshav. By the year 1965, he had been promoted to the rank of  Major and had served in various operational areas facing challenging situations. As the war clouds were gathering in late 1965, Maj Puran Chander’s unit got deployed in the western sector under the command of 35 Infantry Brigade.

During the 1965 war Maj Puran Chander’s unit’s unit 5 JAK Rif was deployed in the Sialkot sector along with other infantry battalions under 35 Infantry Brigade. Though the cease-fire came into effect on 23 Sep 1965, the border skirmishes continued with regular intervals in the western sector for quite some time. By the time of cease-fire the unit was occupying defenses around the Basran village located southwest of Alhar railway station. The unit faced a Pakistani unit across the embankment of the railway line. A no man’s land of around 250 mts separated the two units. Taking advantage of particularly bad weather, the Pakistanis laid two strips of mine in the no man’s land. Subsequent patrolling of the area also indicated that the enemy had occupied a hut located in the no man’s land and was using it as an observation post. Assessing the gravity of the situation, it was decided by the CO, Lt Col R S Pathania, to capture the hut in no man’s land.

Maj Puran Chander who was commanding the Alpha Company, volunteered to undertake the daunting task of eliminating the hut. The operational plan entailed crawling from North, where a few mines had been cleared, and assaulting the hut at night. Maj Puran Chander planned to employ one section for this task. On the night 23/24th Nov 1965, Maj Puran Chander and his gallant men  managed to reach reached within a few meters of the hut. The enemy soldiers got suspicious and swung into action to retaliate. Maj Puran Chander quickly assessed the situation and leapt forward to attack with a grenade. While doing so he received a machine gun burst injuring his severely. He later succumbed to his injuries and was martyred. Maj Puran Chander was a valiant soldier and gritty officer who led from the front and laid down his life at the age of 29 years in the line of his duty.