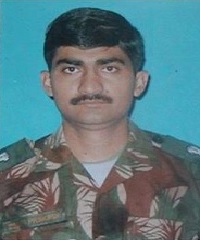 Maj Lalit Prakash Sharma hailed from Dehradun in Uttarkhand and was born on  4th Oct 1974. Son of an Indian Navy veteran Lt Cdr SP Sharma and Smt S Sharma, Maj Lalit Prakash was a second-generation officer who joined the Army after completing his graduation. He was commissioned into the 3 Rajput battalion of the famed Rajput Regiment, known for its valiant soldiers and numerous battle honours.

During the year 2004, Maj Lalit Prakash’s unit was deployed in the Baramulla district of J & K and was engaged in counter-insurgency operations along with manning the forward posts along the LOC. In the second week of Jan 2004, the security forces received information from the intelligence sources about the presence of few hard-core terrorists belonging to Pakistan-based organizations in the higher reaches of Bandipora in the Baramulla district. It was decided by the unit to launch an operation against the terrorists under the leadership of Maj Lalit Prakash. Consequently, Maj Lalit Prakash and his soldiers in a well-planned move reached the suspected area on 17 Jan 2004 and launched the search and cordon operation.

Soon the troops made contact with the terrorists, who on being challenged opened fire at them. The terrorists were heavily armed and resorted to indiscriminate firing in a bid to flee. However, Maj Lalit Prakash using the bold tactical deployment of his troops took on the terrorists courageously. A fierce gun battle followed with a heavy exchange of fire from both sides. A total of six ultras were gunned down during the operation. However, during the crossfire, Maj Lalit Prakash and three of his soldiers including  Naib Subedar Prabhu Singh, Sepoy Ganpat Singh, and Lance Naik Sanjeev Kumar Singh got wounded grievously. Maj Lalit Prakash and his comrades later succumbed to their injuries and were martyred. Maj Lalit Prakash leading from the front displayed true leadership skills and laid down his life in the service of the nation. Maj Lalit Prakash Sharma was given the gallantry award, “Shaurya Chakra” for his courage, steadfast resolve and supreme sacrifice.

Major Lalit Prakash was awarded Shaurya Chakra posthumously for his act of gallantry on 26 Jan 2005.