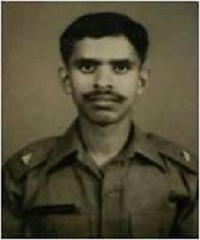 Major John Soundra Pandian hailed from Madurai in Tamil Nadu and was born on 23 Mar 1960. He did his schooling from the esteemed Rashtriya Military School, Bangalore. It was here that the foundation of his future military career was laid. He passed out from the school with flying colors, being adjudged as the second best student and with the recognition of ‘Blue’ in the sport of boxing in the year 1976. After his 12th class he cleared UPSC entrance exam and got selected to join National Defence Academy (NDA) at Khadakwasla, Pune. He joined the 56th course and passed out as Squadron Cadet Captain of ‘Golf Squadron’. Later he went on to join the Indian Military Academy (IMA) in Dehra Dun.

He was commissioned 07 June 1980, as a Lieutenant into 19 Madras of the Madras Regiment, an infantry Regiment well known for its dauntless soldiers and numerous battle exploits.  As his first assignment, he was posted to J&K where his unit was deployed in Tangdhar area of J&K. Subsequently he served in various operational areas and took part in many significant counter-insurgency operations in Manipur. He was also a part of "Operation Savage" in Sikkim. Later Maj JS Pandian joined Indian Peace Keeping Force in Sri Lanka as part of Operation Pawan and operated in Batticaloa region of Sri Lanka.

During May 1996, Maj Pandian‘s unit was deployed in Doda district of J&K close to the Line of Control(LOC). The unit troops were engaged in counter-insurgency operations on a regular basis as its AOR (Area of Operation) was affected by active militancy. The LOC remained highly active and volatile with ceasefire violations occurring very often and without any warning. Besides manning the forward posts in Doda district,  Maj Pandian’s unit also undertook operations to check the infiltration bids as its AOR was prone to infiltration by the militants from across the border. On 09 May 1996, the security forces received credible information from the intelligence sources about the presence of terrorists in Kathua area of Doda district. Based on the intelligence inputs Maj Pandian‘s unit decided to launch a search and destroy operation in the suspected area.

On 10 May 1996, as planned the assault team led by Maj Pandian reached the suspected area. Soon the troops made contact with the terrorists who on being challenged opened fire at the troops. Thereafter a fierce gun battle ensued with heavy exchange of fire. Maj Pandian leading from the front, deployed his troops tactically to block the escape routes of the terrorists. He then displaying displaying commendable courage, in a swift action eliminated one terrorist. However in the meantime, the other terrorist threw a hand grenade which injured Maj Pandian seriously. Maj Pandian later succumbed to his injuries and was martyred. Galvanized by Maj Pandian’s action, his troops in quick succession eliminated other terrorists and concluded the operation successfully. Maj Pandian was a valiant soldier and a fine officer who led from the front and laid down his life in the service of the nation, following the highest traditions of the Indian Army.

Maj JS Pandian was given the gallantry award, ” Shaurya Chakra” for his exceptional courage, indomitable spirit and supreme sacrifice.