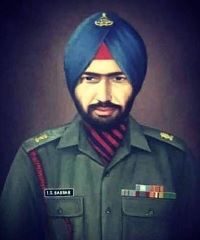 Major Inderjeet Singh Babbar hailed from Jammu and was born on 05 Sep 1969. Son of an Army veteran Col GS Babbar and Smt Harbans Kaur, he always wanted to follow in the footsteps of his father and don the military uniform. Eventually he joined the Army and was commissioned into 14 Field Regiment of the Regiment of Artillery, an important combat arm of Indian Army.  After serving for a few years he got married to Ms Jaya Kapoor and the couple had a daughter Preamvadaa.

During 2003, Maj Inderjeet Singh Babbar's unit was deployed near Darrang district of Assam. At that time, Assam was in a very fragile and volatile state owing to the frequent insurgent activities. The government adopted a cautious wait and watch approach to handle the situation but the situation was very tense and chances of clashes were always there. Consequently, the unit troops had to maintain a high state of alert at all times and be prepared for operations against the militants at a short notice. Based on the information from the intelligence sources, about the presence of ULFA terrorists in an area under its AOA(Area of Operation), the unit decided to launch an operation on 17 June 2003. Maj IS Babbar was tasked to lead the operation along with a team of soldiers.

As planned Maj IS Babbar along with his soldiers reached the suspected area in Neogpara village, five kilometers north east of Deomornai in Darrang district and launched the search and cordon operation. Maj Babbar deployed his troops tactically in such a way that it blocked all possible escape routes for the militants. As the operation was underway at around 11:30 a.m. Maj Babbar and his troops were fired at by the terrorists hiding in a house. This triggered a gun battle with heavy fire from both sides. In this ensuing encounter Maj Babbar sustained grievous injuries in his abdomen and shot dead one ULFA terrorist. Mean while another terrorist from the adjacent house opened fire indiscriminately at Maj Babbar and his buddy. Undaunted and in complete disregard to his personal safety Maj Babbar continued to engage the terrorist and managed to eliminate him. In spite of his critical injuries and profuse bleeding Maj Babbar, refused to be evacuated and continued to systematically destroy the militant hideout.

The third militant who tried to flee while firing on the troops was also injured by Maj Babbar and later shot dead by one of the soldiers. Thus Maj Babbar in a rare show of courage and gallantry engaged in the gun-battle from a close range and managed to eliminate three ULFA terrorists. Despite his injuries he continued to direct his men and ensured that he brought most of the fire upon himself thereby protecting his troops as best as he could. Eventually he succumbed to his injuries due to excessive bleeding and was martyred. Maj IS Babbar was a fearless soldier and gritty officer who led his soldiers from the front. He was awarded the nation’s second-highest peacetime gallantry award, “Kirti Chakra” for his indomitable courage, leadership and supreme sacrifice.