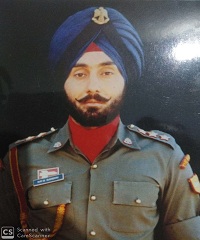 Major Harinder Pal Singh Sandhu’s family hailed from Muktsar in Punjab but, he was born on 04 Jun 1963 in Dharamsala in Himachal Pradesh. Son of Shri JS Sandhu and Smt JK Sandhu, Maj HPS Sandhu got selected to join the army through Combined Defence Services Examination. On 14 Dec 1985, he was commissioned into 6 Guards of the Brigade of Guards Regiment, an infantry regiment known for its intrepid soldiers and numerous battle exploits. After serving for few years with his parent unit, Maj HPS Sandhu was deputed to serve with 1 RR battalion deployed in the Kashmir valley for Counter insurgency operations.

During Dec 1993 Maj HPS Sandhu’s unit 1 RR was deployed in Anantnag district of J & K. The area of responsibility (AOR) of the unit fell in the region that was affected by the militants’ activity. Consequently, the unit troops had to maintain a very high state of alert and were engaged in operations against the militants on a regular basis. Maj HPS Sandhu was commanding the Delta Company of the battalion and also held the responsibility of maintaining the quick reaction team. On 23 Dec 1993, the information was received by the battalion HQs that the Commanding Officer of the battalion and his team had been attacked by a group of terrorists in the Bijebehera area of Anantnag district. Maj HPS Sandhu as leader of the quick reaction team swung into action and organized his soldiers for immediate operation.

Maj HPS Sandhu and his troops reached the suspected area in Bijebehera township and took charge of the situation. The reinforcement by the quick reaction team under Maj HPS Sandhu took the pressure off the Commanding Officer’s team. Maj HPS Sandhu continued to engage the terrorists and pursued them when they started to flee. During the process of chasing the terrorists, Maj HPS Sandhu received a burst of fire from a Universal Machine Gun and was seriously injured. He was evacuated to the nearby medical facility but succumbed to his injuries and was martyred. Maj HPS Sandhu was a valiant soldier and a gritty officer who laid down his life at the age of 30 years in the service of the nation. Maj HPS Sandhu was given the gallantry award, “Shaurya Chakra” for his outstanding courage, leadership, fighting spirit and supreme sacrifice.

Major Harinder Pal Singh Sandhu was the Officer Commanding, Delta Company of No. 1 Rashtriya Rifles Battalion. On 23 December 1993, the company had been given rest. However, Major Harinder Pal Singh Sandhu maintained a quick reaction team and at about eleven in the morning upon receiving word that the Commanding Officer’s party was being fired upon, he rushed to Bijbehera township of Kashmir Valley from the Western direction. The moment he approached the township he was subjected to heavy fire, but he managed to chase the anti-national elements and take the pressure off the Commanding Officer’s party. In the process of pursuing militants. Major Sandhu was hit by a Universal Machine Gun burst. He succumbed to his injuries upon reaching the Medical Inspection Room.

Major Harinder Pal Singh Sandhu demonstrated exemplary courage and spirit of self-sacrifice in his action against the anti-national elements.