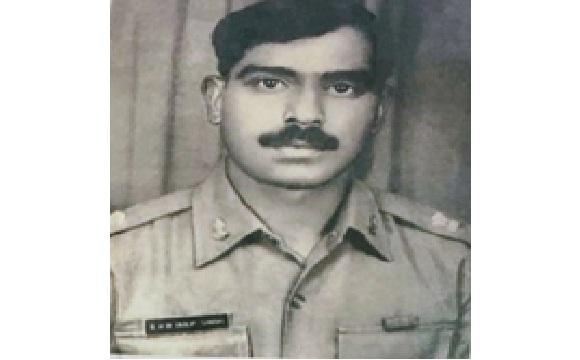 Maj GHD Dulip Singh hailed from Ceylon district in Sri Lanka and was born in a Christian family on 02 Feb 1954. Son of Mr Gnanaraj Manuel (a professor in the Mahajana College) and Mrs Chellam Manuel, he did his schooling from Sainik School Amravati in Maharashtra. After completing his schooling in 1972, he got selected for the prestigious National Defence Academy Khadakwasla. Later he went for further training to IMA Dehradun as a Gentlemen Cadet in Jun 1974 and passed out with 55 Regular Course in Jun 1975.

He was commissioned as a 2nd Lt into the Corps of Engineers, an important combat support of Indian Army. As a young officer, he was nominated for the YO(Young Officers') from 11 Aug 1975 to 07 Feb 1976 at College of Military Engineering, Pune. Later he completed his degree course from the College of Military Engineering, Pune from 05 May 1980 to 30 Apr 1983. During that period he got married to Miss Jayakantha on 04 Oct 1982 at Khadki Mothodist Church. The couple was blessed with two daughters, Kumari Preethi on 18 July 1983 and Kumari Kavitha on 14 Jul 1987.

By the year 1987, he had put in over 12 years of service and had been promoted to the rank of Major. Maj Dulip Singh also underwent various professional courses which included MA-13 course at HAWS, EOCEI-I, ECC-49 & Command Officers' Bomb Disposal Course at College of Military Engineering, Pune. Maj GHD Dulip Singh was quite a linguist too and was well versed with German, English, Hindi and Tamil languages.

As part of Indo-Sri Lanka accord signed on 29 July 1987, the militants of LTTE were supposed to surrender to the Indian Army. During that time Maj GHD Dulip Singh was serving with 8 Engr Regt which became one of the first units to join the IPKF. On 5th Aug 1987, Maj GHD Dulip Singh was named the Officer-in-Charge to assist the Chief of Indian Peace Keeping Force, General Harkirat Singh in the formal surrender ceremony. The ceremony of laying down of arms by the Liberation Tigers of Tamil Eelam (LTTE) was planned to be held at the Palaly Airfield. However the events that unfolded in the following days were totally unexpected and took the Indian Army by surprise.

After signing of the accord, the civilian population started returning to their houses, but to their horror, most of them found their house premises mined and booby trapped. Indian Army decided to undertake operations for removal of mines/booby traps, in order to assist the civilian population for a safe return. Maj GHD Dulip Singh was tasked to undertake one such operation on 12 Aug 1987. The team led by Maj GHD Dulip Singh also included Lt Pankaj Vikram, Naib Subedar Mukunda Rao and Naib Subedar Dhyalan. Maj GHD Dulip Singh along with his team swung into action and proceeded to a house near Jaffna Fort to clear it of any planted explosives. The team managed to successfully clear one house and then entered the compound where a booby trap was spotted.

Maj GHD Dulip Singh despite fully being aware of the danger involved, went ahead to clear that too. Maj GHD Dulip Singh briefed his team members for the actions and proceeded to clear the booby trap. However as the process of diffusing the trap was underway, the LTTE initiated another IED, resulting in a massive blast. The blast had a devastating effect severely injuring Maj Dulip Singh & Nb Sub Mukunda Rao. They soon succumbed to their injuries and were martyred. Maj GHD Dulip Singh was a valiant soldier and gritty officer, who led from the front like a true leader and laid down his life in the line of his duty.

Maj GHD Dulip Singh was given the gallantry award, "Sena Medal" for his commendable bravery, devotion to duty, leadership and  supreme sacrifice.