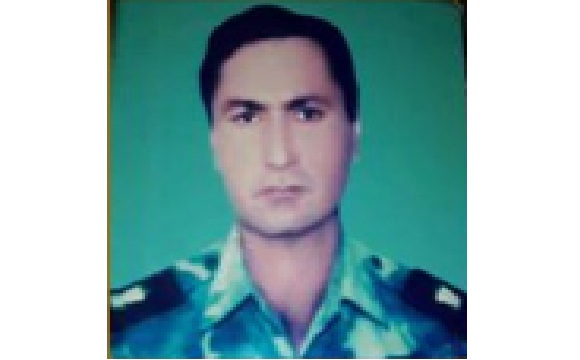 Major Deepender Bhuchar hailed from the Firozpur district of Punjab. Son of  Shri RC  Bhuchar and Smt. Usha Bhuchar, Maj Deepender Bhuchar was inclined to serve in the Armed Forces since since his younger days like many young men in Punjab. Eventually he joined the Army after completing his education and was commissioned into 24 Punjab of the Punjab Regiment, an infantry Regiment of the Indian Army well known for its intrepid soldiers and numerous battle & theater honours.

During Aug 1997, Maj Deepender Bhuchar's unit 24 Punjab was deployed in Uri sector of J&K. The unit under the command of Col MS Patial had moved to the Uri sector in Oct 1996 and was functioning under the operational control of 12 Infantry Brigade. The unit troops were manning the forward posts along the LOC. Besides manning the posts, the unit soldiers had to undertake armed patrols regularly to monitor the area under its AOR ( Area of Responsibility). The posts were located in high-altitude areas with inhospitable weather conditions and rugged terrain. The unit regularly faced unprovoked firing from across the border, so the troops had to maintain a high state of alert at all times. Maj Deepender Bhuchar was functioning as Company Commander of Delta flight of the battalion and was deployed on 'Nanak' post in the north Jhelum Sector of Uri on 23 Aug 1997.

On 23 Aug 1997, the enemy started firing indiscriminately at 24 Punjab posts since morning. The firing started at a forward post, named 'Badal' and then at approximately 8:45 am, another forward and isolated post also came under intense enemy mortar, artillery and heavy machine gun fire. Maj Deepender Bhuchar, exhibiting initiative and exemplary courage in the face of heavy enemy firing rushed along the crawl trench from Nanak to that forward post. On reaching the post, Maj Deepender observed that the situation warranted daring leadership for effective retaliation. In spite of observed heavy machine gun fire from enemy post 'Five Huts', Maj Deepender decided to personally man the 106mm Recoilless Gun in the open. He along with Lance Naik Shamsher Singh engaged enemy bunkers at grave risk to their lives, completely destroying the bunker and killing two enemy soldiers.

In the ensuing battle, an enemy heavy mortar shell caused grievous splinter wounds to both Maj Deepender and L/Nk Shamsher Singh. Undeterred by these wounds they continued to man the 106mm Recoilless gun and also engaged yet another enemy heavy machine gun bunker, with the help of an 84mm Rocket Launcher. This enemy bunker which was bringing down volumes of effective fire on the forward post was destroyed by a direct hit. Maj Deepender Bhuchar continued to motivate his troops with utter disregard to his wound and ensured effective retaliatory fire till his last breath. L/Nk Shamsher Singh also breathed his last while effectively firing the 84mm Rocket Launcher. Maj Deepender and L/Nk Shamsher Singh showed outstanding courage and bravery and laid down their lives, following the true traditions of the Indian Army.   The forward post was later named as "Buchar Post" in the honour of Maj Deepender Bhuchar.

Maj Deepender Bhuchar was given the gallantry award, “Vir Chakra” for his act of conspicuous gallantry, unyielding fighting spirit and supreme sacrifice.

As a company commander of 24 Punjab, Major Deepender was posted on the Line of Control in the North Jhelum Sub Sector in Jammu & Kashmir. He observed that his forward post was under intense mortar artillery and heavy machine gun fire. Unmindfully of enemy shelling and accurate direct fire he rushed along the crawl trench to direct his own retaliatory fire. Realizing that the situation warranted effective retaliation he personally manned the 106 mm recoilless gun in the open. At grave risk to his own safety, he engaged an enemy bunker completely destroying it and killing two enemy soldiers. But in the process, he too received grievous splinter wounds. But he continued to man the recoilless gun and destroyed another HMG bunker by a direct hit. Though in a semi-conscious state due to heavy loss of blood he continued to motivate his troops till his last breath.