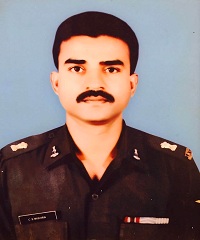 Major Chandra Shekher Mishra hailed from Nainital district of Uttarakhand. He was commissioned into the Jat regiment, a Regiment well known for its gallant soldiers and numerous battle honours.  After serving with his parent unit for few years, Maj Mishra was later deputed to serve with 34 RR battalion, deployed in J & K for counter-insurgency operations.

During Dec 1996, Maj Chandra Shekher Mishra’s unit was deployed in Kupwara district in J & K and was engaged in operations against the militants on a frequent basis.  Maj Mishra was commanding one of the companies of his battalion stationed at Badgam in Kupwara district. Based on the information received from the intelligence sources about the infiltration attempt by some foreign terrorists, the security forces decided to launch a search and destroy operation on 06 Dec 1996, in Kupwara district falling under the  area of responsibility of 34 RR. As planned the team led Maj Mishra reached the suspected area on 6th Dec 1996 and launched the search and cordon operation.

After a while Maj Mishra and his Ghatak commandos made contact with the terrorists and charged towards them to foil their attempt of entering into the Indian territory. A fierce gun battle followed thereafter with both sides exchanging heavy fire. The six heavily armed terrorists then resorted to indiscriminate firing to break the cordon and escape. However Maj Mishra deployed his soldiers tactically to have a tight cordon and plug their escape routes. In the ensuing battle Maj Mishra managed to eliminate two terrorists, however the third terrorist fired at him with his automatic assault rifle leaving him seriously wounded with multiple bullets.

Despite his severe injuries Maj Mishra charged ahead and killed the third terrorist too. During this process his team eliminated two more terrorists and Maj Mishra without caring for his personal safety ran after the last terrorist and managed to eliminate him. Maj Mishra led from the front like a true military leader and inspired his men to complete the assigned task successfully. Maj Mishra later succumbed to his injuries and was martyred. Maj Mishra displayed grit, determination and courage of a very high order and laid down his life in the highest traditions of the Indian Army. Maj Chandra Shekher Mishra was given the gallantry award, “Shaurya Chakra” for his cold courage, unfaltering leadership and supreme sacrifice.

Major Chandra Shekher Mishra, 34 Rashtriya Rifles, was the Company Commander posted at Badgam in Kupwara district. On 6th December 1996, Major Mishra was reported infiltration by Afghan terrorists in his area of jurisdiction. He along with his Ghatak commandos charged towards the terrorists to stop them from entering into the Indian territory. There were 6 terrorists who entered a severe gun battle with Major CS Mishra and his company. Major Mishra eliminated two terrorists and the third one fired at Major Mishra heavily with automatic assault rifle leaving him wounded with multiple bullets. Despite his severe wounds, Major Mishra charged ahead killing the third terrorist. In this process his team eliminated two more terrorists and Major Mishra without thinking of his personal safety ran after the last terrorist and his final bullet eliminated the terrorist. Major Mishra then succumbed to his severe wounds and gave supreme sacrifice for the nation and attained martyrdom. Major CS Mishra displayed, bravery, dogged determination and raw courage in the face of the enemy and made the supreme sacrifice in the highest traditions of the Indian Army and was posthumously awarded Shaurya Chakra.