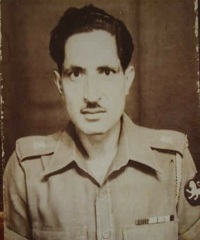 Maj Balram Singh jamwal hailed from Sochani village near Jammu, a village which has produced four General Officers, three Brigadiers and a number of other officers and soldiers. He joined the army like many illustrious sons of his village and was commissioned into 9 JAK Rif in 1948. After serving for nearly 13 years, he was promoted to the rank of Major in 1961. Maj Balram Singh, while still with 9 JAK Rif  was posted as the first 2nd-in-Command of 8 JAK Rif, when the unit was re-raised at Gwalior in 1963.

After putting in few years of service, Maj Balram Singh got married to Ms Nirmal Devi and the couple had five children. Incidentally his elder son, RS Jamwal later joined the army and had the distinction of commanding the same battalion, 8 JAK Rif , where his father had served. He went on to serve for 36 years in the army and later retired as Brig RS Jamwal in July 2012.

During August 1965 Maj Balram Singh’s unit 8 JAK Rif was deployed in Chhamb sector in J & K. Pakistan launched ‘Operation Gibraltar’ in Aug 1965, wherein thousands of infiltrators were sent across the border to carry out sabotage and subversion. The first clash with the infiltrators took place on 07 Aug in Sunderbani area. 8 JAK Rif was deployed in Deva sector opposite Chhamb during that period. On the same night Battalion HQs at Deva was raided by Pakistan as a prelude to a major offensive. On 14 Aug Pakistan artillery began shelling with medium guns and howitzers, Kalidhar posts and the Battalion HQ at Deva. Pakistan continued heavy shelling and attacks on Platoon and Company pickets to remove them to prepare a Firm Base for her major offensive by an Infantry Division and Armoured Brigade.

Pakistan was desperate to establish a secure firm base for the major offensive planned to capture Jourian and Akhnoor with a view to cut off Poonch – Rajouri area from rest of the State. During this intense firing Maj Balram Singh Jamwal, the Second-in-Command of the Battalion, although outnumbered and surrounded from all directions, refused to leave the forward post and continued to thwart the enemy’s attempts to create a secure firm base. The enemy forces continued heavy shelling on the second day too and Maj Balram Singh, who was leading from the front got seriously injured in the shelling.  He later succumbed to his injuries and was martyred. Maj Balram Singh was a valiant soldier and an officer par excellence who led his men like a true military leader. He displayed outstanding courage, grit, determination, leadership skills and made the supreme sacrifice, following the highest traditions of the Indian Army.

Mrs Reeta Jamwal, daughter of Maj Balram Singh Jamwal, paid tribute to her father on his “Day of Martyrdom” on 15 Aug 2019…..

15th August is indeed a red-letter day in the history of India but it has another connotation too in the history of our family. This was the day, 54 years back when my father Maj Balram Singh Jamwal was martyred battling against the enemy forces in J&K. My father was a soldier of unshakable courage who refused to leave his post despite overwhelming odds against him and fought till his last breath.

He left behind Mrs Nirmal Jamwal, a young pregnant widow of 22 years, who had 4 other children to look after. My mother, though stunned by the sight of the crumbling world in front of her eyes, soon braced up to face the world squarely. She, like a true soldier’s wife showed remarkable resilience and determination to bring up 5 young children single-handedly,

My father remained my mother’s hero as long as she was alive and proudly showed that off in ample measure in her thoughts and actions. Although my mother missed the presence of her hero, she always felt proud to be a martyr’s wife and held the “Indian Army” in high esteem. So much so that she encouraged my brother to join the army, who later became the commanding officer of 8 JAK Rifles, the same battalion where my father had served.

Though as children we saw very little of my father, we always found him around through my mother’s stories and memories about him. We grew up adoring him and taking inspiration from his stories of courage and devotion to duty. My father will always remain my “hero” and a compelling reason of looking at 15th Aug through the prism of a martyr’s family.

Thus for me, 15th Aug is also the day to remember the sacrifice of my father and many other soldiers like him who have preserved our freedom with their supreme sacrifice.