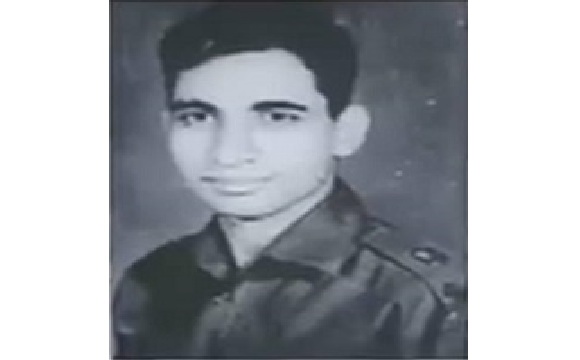 Major Ashok Kumar Suri hailed from Faridabad in Haryana. Son of a late yoga therapist, Shri Ram Swaroop Suri, Maj AK Suri was the youngest of four siblings. After completing his education he joined the army as a commissioned officer. He was commissioned into the 5 Assam Battalion of the Assam Regiment, an Infantry Regiment with a rich history of gallantry and battle honours.

He soon developed into a tough soldier and fine officer who commanded respect of his seniors and men as well. He was also a keen sportsman and specially excelled in playing hockey. In the early 1971, he got promoted to the rank of Major and by that time he had served in varous challenging operational areas. In the year, 1971 when the war clouds appeared on the horizon his unit got deployed on the western front.

The Indo-Pak war of 1971 officially commenced on 03 Dec 1971 when the Pakistani Air Force attacked various airfields of the IAF. Within hours after the air attack, Pakistan’s 23 Division opened Artillery fire with all its nine Regiments along a 30-40 Kms front in the Chhamb sector. Soon thereafter a well-coordinated attack with armour was launched on the 191 Brigade, which was the only Brigade of 10 Division of Indian Army defending the area west of the Munawar Tawi river at that time. 5 Assam was part of the 191 Brigade and was given the task of blunting the Pakistani attack. Maj AK Suri’s battalion was occupying a key position for the defence of Chhamb, when the enemy launched an attack on the night of 04 December 1971.

The attack continued throughout that night and thereafter for sixteen hours but 5 Assam troops held on gallantly and thwarted the enemy’s advance. However as the position was of strategic importance to the enemy, it launched another battalion attack on the 5th morning, preceded by heavy artillery fire. On that day Maj AK Suri, who was functioning as a Quarter Master took charge of a small convoy of three vehicles containing arms and ammunition and set off to the front line location of his battalion. During that time his battalion was defending Munnawar and Darh crossings over the river Tawi against the Pakistani attack. Around 1600 hrs  Maj AK Suri's convoy came under heavy shelling and he got injured.  He was evacuated to 310 Field Hospital at Jourian for medical treatment. Later he was declared "Killed In Action". But he is believed to have been captured and taken prisoner, as his body was never found.

However, a confusion continued to persist about his death, as some of the Prisoners Of War (POW) lodged in a Pakistani jail, later informed about the presence of Maj AK Suri in Pakistani Jail.  Later his father Shri RS Suri during his search for his son found many leads/evidences that gave credence to the fact that Maj AK Suri was being kept as a POW in Pakistan. Pakistan, however never acknowledged the presence of Maj AK Suri in a Pakistani jail. Presently, Maj AK Suri’s name features on the official list of the ’54 Personnel Missing in Action’, tabled in the Lok Sabha in 1979 by the then Minister of State of External Affairs Shri Samarendra Kundu.

Ashok touches thy feet to get your benediction. I am quite ok here. Please try to contact the Indian Army or Government of India about us. We are 20 officers here. Don’t worry about me. Pay my regards to everybody at home, specially to mummy, grandfather – Indian government can contact Pakistan government for our freedom.”