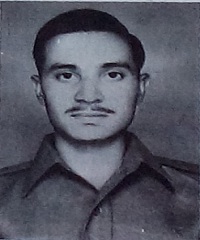 Major A.S. Gahlaut was given the task of establishing a roadblock deep within enemy-held territory in the Laksam Sector on the Eastern Front. He infiltrated his company through enemy lines, established a roadblock and inflicted heavy casualties on the enemy. Subsequently, a company of his battalion came under heavy enemy pressure and Major Gahlaut volunteered to go to the assistance of the company. In this mission, he led a platoon and successfully pinned down the enemy company by bringing effective small arms fire on them. His position was, however, attacked by the enemy from a different direction. Undeterred by the overwhelming superiority of the enemy, he rallied his men and succeeded in breaking the enemy attack. Having been mortally wounded in hand-to-hand fighting, he died shortly after his heroic battle.