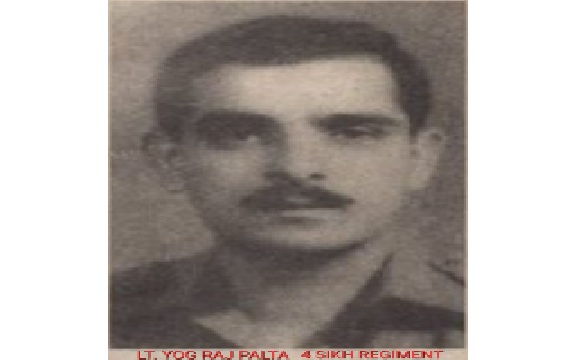 Lieutenant Yog Raj Palta hailed from Delhi. Son of Shri Shadi Lal Palta, he got selected to join the Army after completing his school education. He got commissioned into the 4 Sikh battalion of the Sikh Regiment, an infantry regiment known for its dauntless soldiers and numerous battle honours. Very early in his service career, Barely one year into service, Lt Yog Raj Palta got involved into thick of operations as his unit got deployed on the eastern border, when the war with China became imminent.

During the 1962 Indo-China war, Lt Yog Raj Palta’s unit 4 Sikh was deployed in Siang Frontier Division, south of Mc Mohan line along the border. By third week of Oct 1962, India had already faced many reverses in the war and many organizational changes were made to deal with the situation. Initially 5 Infantry Brigade was responsible for the Walong Sector. As a sequel to the reorganization, after the fall of Tawang, a new formation 2 Infantry Division was raised with Maj Gen MS Pathania as the GOC. The newly raised Division was assigned the responsibility of the whole of NEFA, less Kameng (Tawang) Sector. Consequently, 181 Infantry Brigade was allocated for Walong Sector. However, later on GOC’s insistence, entire 181 Infantry Brigade was moved out and 11 Infantry Brigade under Brigadier NC Rawlley was moved to Walong. Though the main axes of penetration by the Chinese forces were Tawang-Bomdila-Rupa axis, the Taksing-Limeking Axis, Mechuka/Manigong-Tato axis, the Gelling-Tuting axis, and the Kibithu-Walong axis, some fierce battles were fought in the Walong-Kibithu area of present Anjaw district. Lt Yog Raj Palta’s unit 4 Sikh played a crucial role in the "Battle of Walong".

By the first week of Nov, 11 Infantry Brigade had established itself finally with its full complements. 4 Sikh battalion was deployed on both sides of the Lohit River with the Battalion less ‘D’ Company on the West  and the ‘D’ Company on the East in the area of High Plateau, the latter under command 3/3 GR.  On the West, a company each was deployed at Patrol Base, Ladders and High Plateau, with the Battalion HQ in the Area West  Ridge.  Lt Yog Raj Palta was given command of a rifle company deployed at High Plateau. On the night of 15 Nov 1962, the Chinese forces attacked his company position in large numbers. Heavy fighting erupted with both sides launching fierce attacks and counterattacks. To inspire his men, Lt Yog Raj went forward and moved from bunker to bunker despite enemy fire. Under his leadership, many of his soldiers engaged the enemy in close combat also. Lt Yog Raj's presence boosted the morale of his men, who fought valiantly and repulsed repeated enemy attacks during the night. Early next morning the Chinese re-attacked their position with more forces and firepower. During the intense fighting, Lt Yog Raj got badly wounded, but kept cheering his men until he succumbed to his injuries. Lt Yog Raj Palta was a valiant soldier and determined officer who led from the front and laid down his life in the line of his duty.

For his exceptional courage, gallantry and leadership during the war, Lt Yog Raj Palta was awarded the third highest gallantry award of the nation, the "Vir Chakra", posthumously.

The citation for ‘Vir Chakra Chakra’ awarded to him reads:
Lieutenant Yog Raj Palta was in command of a rifle company in forward area in NEFA. On the night of 15 November 1962, the Chinese attacked his company in large numbers. To inspire his men, Lieutenant Palta went forward and moved from bunker to bunker despite enemy fire. His presence boosted the morale of his men who fought gallantly and repulsed repeated enemy attacks during the night. Early next morning the Chinese attacked his position again. Lieutenant Palta was badly wounded. In spite of his wounds he kept cheering his men until he succumbed to his injuries. Lieutenant Palta's complete disregard for his personal safety and selfless devotion to duty inspired the men under his command to repulse repeated Chinese attacks.