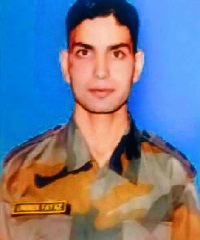 Born on 08 June 1994, Lieutenant Ummer Fayaz was a son of a farmer, Shri Fayaz Ahmed Parrey and Smt Jameela from Sudsona village in Kulgam district in J & K.  Lt Ummer had studied from Jawahar Navodaya Vidyalaya, Anantnag and always aspired to become an officer in the Army. After passing his class 12 he cleared the NDA exam and went on to the prestigious NDA to pursue his dream of becoming an Army officer. After the training at NDA, he went to IMA Dehradun for the next phase of training. He was a keen sportsman and excelled in sports during his training period, especially hockey.

Lt Ummer was commissioned on 10 Dec 2016 into 2 Raj Rif of the famed Rajputana Rifles Regiment, a regiment known for its valiant soldiers and numerous battle honours. As a first assignment after his training, he joined the unit that was deployed in the Akhnoor sector of J & K.

During 2017, Lt Ummer’s unit was operating in the Akhnoor sector of J & K. By May 2017, Lt Ummer had completed nearly four months in the unit and had honed his field craft skills. As a young energetic officer of the unit, Lt Ummer had endeared himself to his seniors and juniors as well with his soldierly skills and affable nature. In early May 2017, Lt Ummer went to his home town on leave to attend one of the family members’ wedding. The wedding of his uncle’s daughter happened to be at Batapura near Behibag in Shopian district of J & K.

In an unfortunate and dastardly act, the militants kidnapped Lt Ummer from there and later brutally killed him. His bullet-ridden body was later recovered from Harmain village in Shopian district of J & K. Lt Ummer as an Army officer was the pride of the family and was the source of inspiration for many young people of his village. He was serving as a role model for many youngsters and was responsible for many youths from nearby villages joining the army. This probably had irked the militants and was the reason for his kidnapping and subsequent killing. The precious life of a dedicated and committed soldier was lost in this reprehensible and dastardly action by militants. Lt Ummer Fayaz was a valiant soldier and a fine officer, who laid down his life in the service of the nation following the finest traditions of the Army.