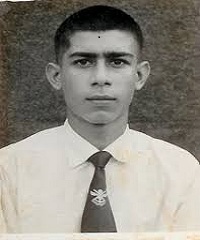 Suresh Kundanmal burst on the NDA scene in 1959 like a star in the image of the then Hollywood heart throb, Elvis Presley. A singer, drummer, dancer, with a crew cut,  impeccable manners, chivalrous to the hilt, aristocratic in temperament and with a large benevolent heart, he was one of the most popular cadets that NDA had ever seen. Looking back over the years, I wonder, if Suresh chose the right career when he joined the Navy. He could have been even a greater hit in the entertainment industry.

Suresh was born in an eminent lawyer’s family and was one amongst seven children. Unfortunately, he lost his father at a young age. His older brother migrated to the USA and the responsibility of being the head of the family fell on Suresh’s shoulders whilst he was a young cadet. His mother, three younger brothers, and one sister lived in a posh flat in Nanik Niwas on Breach Candy in Mumbai, a home that became a home away from home for many of us, Suresh’s batchmates.

At NDA, Suresh displayed excellent leadership qualities, played basketball, excelled at western music but most of all made a name for himself as a great friend. I was fortunate to get to know him closely although he was not in my squadron. He would make it a point to come to my squadron after dinner & teach some of us ball room dancing in the ante-room. After NDA, the naval batch moved onto INS Tir. A cadet’s life on the training ship could be pretty depressing on occasions with a lot of time spent scrubbing decks, painting the ship’s side and washing dirty plates. In addition, slap on an aggressive foul tongued XO (2nd in command) and a sadistic Petty Officer incharge of training; no wonder, our batch was often in the dumps! Suresh was the saving grace. He was always good humoured, ever willing to cheer us up with his jokes and singing. His mimicry & singing skills charmed even a taciturn & cerebral captain like Cdr. Barboza. Suresh regaled the ship’s company with songs from “My Fair Lady”, then, a popular movie based on the play “Pygmalion”.

Our days as Midshipmen were spent on Vikrant, Mysore & Rajput. Luckily I had Suresh as my shipmate on all three ships. On Vikrant, whilst at sea, the Captain ordered a one hour programme to be broadcast daily on the day’s activities, news & some entertainment. Suresh excelled in conceptualizing & implementing this broadcast to the ship’s company on the intercom every evening. On INS Rajput, Suresh & I were the only Midshipmen. We had a fine bunch of officers led by Capt.  Claudius. The fleet visited Bangkok. On our free evenings, Suresh & I would go out dancing. One morning after returning on board in the wee hours we had to undergo the daily Morse code signalling exercise by reading a message on the ship’s mast head flashing lights. Since we could hardly keep our eyes open we fared badly. Unluckily for us the Officer on Duty who observed our late arrival was also the ship’s Communications Officer & responsible for our Morse code training. We were hauled up and “Excused Liberty” for the rest of our stay in Bangkok. A huge punishment for young naval bachelors in Bangkok!

Suresh was undoubtedly a night bird. He loved to party & sleep late. It was difficult for him to keep up with the training programme of a Midshipman that commenced at 0630 hrs daily. Being his cabin mate along with two other seniors it was my duty to wake up Suresh on time for the morning roll call, (both watches fall-in). His alarm clock would keep ringing, the bed tea would lie untouched & all my efforts to wake him up would fall on deaf ears. It took me many months to realize that Suresh would respond to soft whispering calls of “Wake up” rather than to loud shouts or a physical shake up. It dawned on me that Suresh, although physically tough, was really a soft & tender-hearted person inside.

Whenever his ship was in harbour in Mumbai he would invariably attend to his duties at home. He would tutor his youngest brother, facilitate another brother’s business venture and was always a pillar of strength for his mother. One day Suresh came up with the idea of organizing a Western Music competition at the Tajmahal Hotel. We called it the “Hot Beat Session”, printed brochures, car stickers & raised funds for the event. I was very happy to help him organize this competition which was held in the Ballroom on a Sunday afternoon. It was a grand success. I got my first experience of fund raising as a young Sub Lt. Working with Suresh on any idea was a tremendously energizing & uplifting experience. He had the knack of bringing out the best in a person whilst having serious fun along the way.

In 1964, our batch was undergoing Sub Lts training in the naval base at Kochi. Suresh and I decided to invest our kit allowance of Rs 1000 each in a 1936 model Singer car which was on sale from a senior naval officer. We shared this car for the whole year on a monthly budget of Rs.25 each (Petrol was cheap at Rs 1.50/litre). Barring an occasional puncture we had no difficulty in running the car. On rainy days our batchmates would pile into the car and avoid marching to training school. Many of us learnt our driving on this car and got our licences. Sure enough Suresh took pride and pleasure in teaching driving to all those who wished to learn. One day our car was parked in the Gunnery school on a newly laid tarmac. The car left some oil stains in the parking lot. The Officer In-Charge had an eagle eye. Suresh and I were hauled up next morning and given a dressing down for parking an oil dripping car in the otherwise spotless Gunnery school premises. We were debarred from driving to Gunnery school from then on. The car did evoke envy in some of our seniors.

Soon our training was over. We went our different ways, posted to different ships but always seeking opportunities to spend time together. Whilst he was on INS Shakti and I on INS Magar in 1967/68, we would often organize jam sessions on board either ship and invite close friends to spend a leisurely Sunday afternoon. Suresh was tall, handsome and extremely smartly dressed on all occasions, a lady’s man to the core. Soon he fell in love with a beautiful young Art student from Dehra Dun named Sheema who lived in the girls’ hostel on Marine Drive. Suresh fell for her hook, line and sinker and soon he & Sheema were married. It surprised all of us, batchmates, that Suresh was one of the first to tie the knot in our group.

Suresh and I, both specialized in Navigation & Direction and then served as As D.C (Ed. ADC). He was ADC to the Governor of West Bengal whilst I was appointed to the President’s staff. We would often exchange funny stories of life as an ADC. Just before the 1971 war Suresh was appointed Navigation officer of INS Khukri whilst I was still at Rashtrapati Bhavan. In Nov 1971, Suresh whizzed through Delhi enroute to Dehra Dun where Sheema gave birth to their daughter Co Co. He stayed with me overnight at Rashtrapati Bhavan & was full of joy having seen his child. He had to rush back to his ship as the Navy was about to go into action.  That was the last I saw of Suresh.

INS Khukri was torpedoed a few days later. Tragically Suresh was not one of the survivors. A shipmate, Manu Sharma, told me later that Suresh was one of the last on the bridge to be pushed by their captain, Cdr. Mulla to abandon ship. Before jumping overboard, Suresh, who was a poor swimmer, gave away his life jacket to another sailor. So typical of our large hearted friend!

They say God’s favourite children die young! Suresh’s death was a great loss to the service, to his family and to all of us, his grieving course mates of 22nd Course. May his soul rest in peace!

A poem by his younger brother, Subash Hiranand Kundanmal: