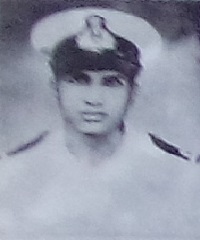 Lt Suresh Gajanan Samant hailed from Dasuya village in Ratnagiri District of Maharashtra and was born on 31st May 1941. Son of Shri Gajanan Gopal, Lt Suresh Gajanan graduated from the Park college. Subsequently he got selected to join the Indian Navy and completed his training in the year 1966. He was commissioned into Indian Navy at the age of 25 years and got trained as a navigation officer.

After serving for sometime, he got married to Ms Chitra. By 1971, he had been promoted to the rank of Lt and also had been trained as a diver. By that time he had put in around 5 years of service and had served on various war ships. However very early in his service career, he got involved in the thick of operations as border tension arose with Pakistan in 1971.

During 1971, Lt Suresh Gajanan Samant was serving aboard INS Kiltan one of the two Petya Class frigates of Indian Navy at that time. The India-Pakistan War of 1971 began on December 3, 1971, when the Pakistan Air Force launched pre-emptive strikes on airfields in Western India. In response to the Pakistani attack, Indian Navy launched "Operation Trident" to  inflicted heavy damage on Pakistani vessels and facilities. The Naval strike force for the operation consisted of a group of Osa-I missile boats —  INS Nipat, INS Nirghat and INS Veer (individually under the commands of Lt. Cdrs. BN Kavina, IJ Sharma and OP Mehta and as a squadron under Cdr. BB Yadav. Later two Petya class Frigates — the INS Katchall (under Cdr. KN Zadu) and INS Kiltan (under Commander. G Rao) joined the force. Lt SG Samant was serving as a Navigation Officer aboard INS Kiltan.

During the operation on 05 Dec 1971, Lt SG Samant  as navigating officer, was responsible for getting the ships in a position to attack enemy ships off Karachi and also other installations in the harbour. He displayed great professional skill and played a key role in achieving the aim of the mission. Subsequently, led a team of divers to search for underwater saboteurs. However while doing so, he laid down his life. Lt SG Samant was a valiant soldier and gritty Naval officer who led from the front and made the supreme sacrifice, following the highest traditions of Indian Navy. He was given the gallantry award “Vir Chakra” for his exceptional courage, camaraderie, devotion to duty and supreme sacrifice.

Lieutenant Suresh Gajanan Samant was on board an Indian Naval unit which attacked Karachi on the night of 5th December 1971. As navigating officer, he was responsible for getting the ships in a position to attack enemy ships off Karachi and also other installations in the harbour. He displayed great professional skill and devotion to duty and was instrumental in achieving the aim of the mission. Subsequently, he laid down his life while searching for underwater saboteurs.