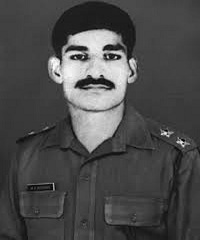 Lt Ram Prakash Roperia, son of Shri Bhal Singh, was born in Pali village in Hissar District of Haryana on 10th June 1959. His early education took place in his village school and later he went to Sainik School, Kunjpura in Haryana. He passed his Higher Secondary examination with First class in 1976. Ram Prakash was a boy of good nature and was liked by his teachers and colleagues equally. He excelled in academics and sports both.

He completed his B.Sc (Hons) in Agriculture from the Haryana Agricultural University with First division. After his graduation he joined Indian Military Academy and was commissioned in the Indian Army on 19th December 1981 in the 26th Battalion of the Madras Regiment

On the night of 5th/6th June 1984, during Operation Blue Star, ‘C’ Company of 26 Madras was shouldered the task to secure the first floor of a building complex that was held by the notorious terrorists. The Building Complex was heavily fortified by the terrorists. Lt Ram Prakash Roperia was the officiating officer commanding of ‘C’ Company of 26 Madras. Terrorists armed with automatic weapons had blocked the staircases leading to the first floor. Lt Ram Prakash Roperia studied the situation and came to a conclusion of climbing the building with the help of a ladder, without giving even a single thought about his personal safety. While attempting to climb to the first floor he was pinned with machine gun firing, however he continued dauntlessly with his attempts to reach the first floor and only post three attempts he asked for the support.

In the fourth attempt where he was accompanied by Nb Sub KG Koshy, they made it to the first floor of the building. They were followed by the company that helped them achieve their allotted objectives and destroyed the terrorists stronghold. Deluged in machine gun firing Lt Ram Prakash Roperia and Nb Sub KG Koshy cleared the bunkers. He led his company courageously even while clearing the stairs of the first floor a bullet pierced him. The bullet injury didn’t bring any change in his motivation instead he upped his effort and lobbed two hand grenades and moved further on the stairs. He was again fired by a terrorist which injured him seriously but he also fired back and eliminated the terrorist who had shot him. He was seriously injured and hit by two bullets still he climbed down the stairs and established line with D company. However, as he reached the ground floor he collapsed and was evacuated to hospital where he succumbed to his injuries.

In this action he showcased the utmost valour, courage and exemplary leadership. His devotion towards his duty and mother nation is exceptionally high. He was awarded with nation’s highest peacetime gallantry award  ‘Ashoka Chakra’ posthumously.

The Citation for Ashok Chakra Award reads him to :

During Operation Blue Star, Lt Ram Prakash Roperia led his company on 05/06 Jun 1984, with exceptionally high motivation, physical courage and magnanimous dedication against heavily armed extremists, thereby, setting an example for his troops. His courage and leadership inspired his men to press on the attack even after his demise because of injuries.

For this act of most conspicuous gallantry, leadership and exceptional devotion to duty, Lt Ram Prakash Roperia was awarded the highest gallantry award in peace ‘Ashoka Chakra’ posthumously.