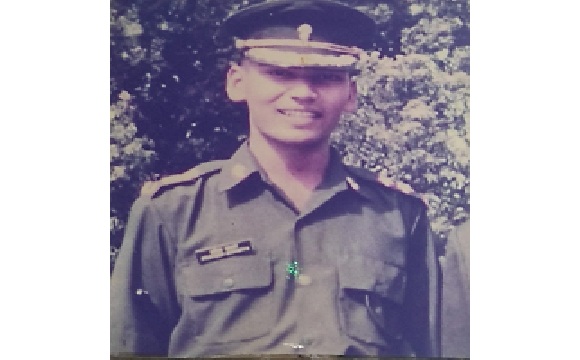 Lieutenant Prateek Acharya hailed from Dehradun in Uttarakhand, but was born in Assam on 11th December 1974. Son of Shri V N Acharya and Smt Bina Acharya, Lt Prateek had a sister Ruchi as his sibling. He completed his schooling at St Thomas' College and graduated from DBS college in Dehradun. He was bright in academics and was passionate about sports too. He had a keen interest in cricket and would often play gully cricket in Dehradun's by-lanes whenever he found time. He was a compassionate and affable person which endeared him to everyone who came in contact with him. He was a family person too and doted on his parents and sister immensely.

His list of friends grew along with his age and it had people from all walks of life including the locality's cobbler too. Having grown up in Dehradun, the home to the prestigious IMA, he had inclination to serve in the Armed Forces right from his growing up years. Eventually he got selected to join the Army and became a commissioned officer on 13 June 1998 at the age of 23 years. He was commissioned into 19 Grenadiers battalion of the Grenadiers Regiment, an infantry Regiment known for its brave soldiers and having a glorious history of various battle honours. When the Kargil war started, he was doing his "Young Officers Course" in MHOW (Madhya Pradesh), and desperately wished to be called to the war front, which eventually happened.

During Sept 1999, Lt Prateek Acharya's unit 19 Grenadiers was deployed in Chhamb sector of Jammu as part of "Operation Vijay".  When Indian Army launched "Op Vijay" in response to the large scale infiltration by Pak forces in J&K, 19 Grenadiers was moved to Chhamb sector of Jammu. Lt Prateek Acharya and his unit troops got involved into thick of operations, immediately on deployment. Though Kargil war officially came to an end on 26 July 1999, border skirmishes and enemy hostile actions continued thereafter too, albeit with less intensity. Lt Prateek Acharya and his troops were maintaining a very high state of alert at all times and giving a befitting reply to intermittent unprovoked cross-border firing.

On 27 Sep 1999, Lt Prateek Acharya as platoon commander was stationed on the Line of Control at Pallanwala in Chhamb sector of Jammu. His troops were manning the forward posts in that area on that day, when Pakistani forces resorted to unprovoked cross-border firing in the evening.  At around 6:30 pm, when two mortar shells landed near the posts, Lt Prateek immediately swung into action and directed his troops to move into the bunker and prepare for retaliatory action. In the meantime, Lt Prateek  saw one of his soldiers Lance Naik Chauhan Bachu Bhai Govind Bhai rushing to retrieve the platoon telephone set. Realizing the gravity of the situation, Lt Prateek pushed him inside a bunker and ran himself to retrieve the set.  After ensuring that his men were safe, when Lt Prateek was about to step inside the bunker, he was directly hit by an 82mm high explosive mortar bomb. It proved fatal for Lt Prateek and he was martyred. Lt Prateek Acharya was a committed soldier and a fine officer who at the age of 24 years made the supreme sacrifice in the service of the nation. He was given the gallantry award, "Sena Medal" posthumously for his immense courage, camaraderie, devotion to duty and supreme sacrifice.