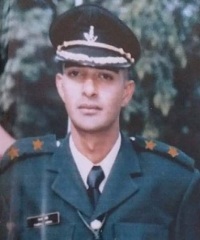 Place of Birth : Bareilly dist (UP)

Lt Pankaj Arora was born on 20 Sep 1978 and hailed from Bareilly in Uttar Pradesh. Lt Pankaj had the inclination to join the armed forces since his growing up years and continued to follow his dream. After completing his graduation he got selected to join the army through Combined Defence Services Examination. Consequently, he joined the Indian Military Academy and got commissioned on 10th Dec 2002 at the age of 24 years. He was commissioned into 18 MLI of the Maratha Light Infantry Regiment, an infantry regiment well known for its intrepid soldiers and numerous battle honours.

During Aug 2003, Lt Pankaj’s unit 18 MLI was deployed in Poonch district of J&K for counter-insurgency operations. Lt Pankaj was quite happy with his first assignment at Poonch, as he belonged to “Poonch” company during his IMA days. The AOR (Area Of Responsibility) of his unit was a hotbed of militant activities during that period and consequently, the unit troops had to be on guard at all times. Lt Pankaj in a short time developed fieldcraft skills required to undertake counter-insurgency operations. He also developed a network of local informants as part of the intelligence-gathering mechanism of the unit. Based on the information received from the unit intelligence sources about the presence of some hardcore terrorists in its AOR, the unit decided to launch an operation on 24th Aug 2003. Lt Pankaj was tasked to lead that operation along with few soldiers of his unit.

Lt Pankaj and his soldiers reached the suspected area as planned. However, before the troops could make contact with the terrorists, they were attacked by over 15 terrorists hiding nearby. Though taken aback by the surprise attack, Lt Pankaj quickly reorganized his team and retaliated. Lt Pankaj. showing great courage and gallantry eliminated two terrorists single-handedly. However, due to deliberate wrong information given by the local informant, Lt Pankaj and his team were caught off-guard. Lt Pankaj was eventually captured by the terrorists and tortured subsequently. His body was recovered later by his unit personnel. Lt Pankaj was a valiant soldier and a gritty officer who laid down his life at the age of 25 years in the service of the nation.

Lt Pankaj Arora was given the gallantry award “Sena Medal” for his outstanding courage, leadership, and the supreme sacrifice during the operation.