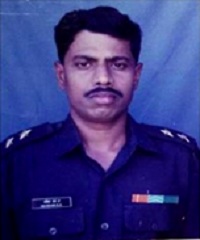 Lt Mayekar Narendra Atmaram hailed from Vasco da Gama, Goa. Son of Shri Atmaram and Smt Bhagirathi, Lt Mayekar joined the Army after completing his graduation. He joined as a Short Service commissioned officer and was commissioned into the Corps of EME, which supports Indian Army in areas related to the design, development, trial, inspection and refit of weapon systems and equipment. After completing his training he was posted to the North East and deputed to serve with 11 Sikh infantry battalion.

During Feb 2000, Lt Mayekar was serving with 11 Sikh battalion deployed in Assam.As the AOR(Area of Responsibility) of the unit was affected by militancy, the unit troops were engaged in operations against the militants on a frequent basis. The unit launched regular patrols to monitor suspicious activities as part of their operations to keep militancy under check. The militants invariably belonged to ULFA (The United Liberation Front of Assam) a designated revolutionary rebel organization, which sought to establish an independent state of Assam. On 26 Feb 2000, the unit launched an operation against a militant hideout based on the information from the local intelligence sources. Lt Mayekar was assigned the task of leading the operation.

Lt Mayekar along with his troops reached the suspected area in Bagariguri village and launched a cordon operation. On being challenged the militants opened fire and a fierce gun battle ensued thereafter. After tightening the cordon, he asked his men to provide fire cover, while he led the direct action. During the exchange of fire Lt Mayekar got injured. Despite being injured, he gallantly handled the assault, killing some militants single handily. Though bleeding profusely, he refused to be evacuated till all the militants were neutralized. He later succumbed to his injuries and was martyred. Lt Mayekar was a valiant soldier and determined officer who led from the front and laid down his life in the line of his duty. Lt Mayekar was given the nation’s second highest peace time gallantry award, “Kirti Chakra” for his outstanding courage, leadership and supreme sacrifice.