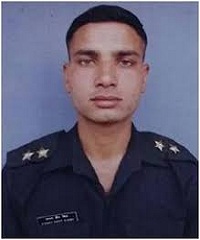 Lt Kanavdeep Singh hailed from Amritsar in Punjab. Son of Shri Sukhwant Singh and Smt Rajbeer Kaur, Lt Kanavdeep was inclined to join the Armed Forces since his younger days. Eventually after completing B.Sc.(honours) degree from Guru Nanak Dev University, he got selected to join the Army through the Combined Defence Services Examination. In Jan 2001, he was recruited into 10 Sikh of the Sikh Regiment, an infantry Regiment known for its gallant soldiers and numerous battle exploits.

After completing his training he got posted to the Kashmir valley as his first assignment. Within short time he built his reputation of being a fearless soldier and a fine officer. Popularly known as Lt KD among his colleagues, he was liked and respected by everyone in his battalion.

During 2003, In 2003, Lt Kanavdeep’s unit was deployed in Baramulla district of J&K. As a number of militants were active in the AOR(Area of Responsibility) of the unit, the troops were engaged in counter-insurgency and counter infiltration operations on a regular basis. The unit was also part of ongoing “Operation Parakram” launched by the Army in Dec 2001. On 23 Sept 2003, Lt Kanavdeep Singh was tasked to lead a platoon in carrying out a search and destroy operation in Gurez Sector of Jammu & Kashmir. On that day a  patrol party of Ladakh Scouts got ambushed by terrorists wherein two soldiers got injured and many more got trapped under heavy fire. Lt Kanavdeep, realizing the gravity of the situation, immediately decided to divert his platoon to rescue the trapped patrol.

As Lt Kanavdeep and his men closed in, they came under heavy fire from the second group of terrorists, hiding in an inaccessible natural cave. Without regard for his personal safety, Lt Kanavdeep shot and killed one terrorist. Meanwhile, he noticed that his rocket launcher detachment was unable to fire at the terrorists owing to effective terrorists’ fire.  Lt Kanavdeep then moved towards the detachment but received gun shots and got injured during this process. by terrorist fire. However, despite being wounded, Lt Kanavdeep displaying rare courage crawled over to the detachment and fired the Rocket Launcher killing the second terrorist and injuring the third one. During this process, Lt Kanavdeep had excessive blood loss and collapsed. He later succumbed to his injuries and was martyred. Lt Kanavdeep Singh was a valiant soldier and gritty officer who led from the front like a true military leader.

The citation for Kirti Chakra awarded to him reads :

Lt Kanavdeep Singh along with a platoon was tasked to carry out search and destroy operations in Gurez Sector, Jammu & Kashmir. On 23 September 2003, a  patrol party of Ladakh Scouts was ambushed by terrorists; two soldiers were injured while the others were trapped under heavy fire.

Lt Kanavdeep Singh, realizing the gravity of the situation, without waiting for any orders, immediately diverted his platoon to rescue the trapped patrol. As his platoon closed in, they came under effective fire from the second group of terrorists, hiding in an inaccessible natural cave. Without regard for his personal safety, the officer shot and killed one terrorist. Meanwhile, he noticed that his rocket launcher detachment was unable to fire at the terrorists due to effective terrorists’ fire.  The Officer then moved towards the detachment but was wounded by terrorist fire.  Despite being wounded, the officer crawled to the detachment and fired the Rocket Launcher killing the second terrorist in close combat and injuring the third. Due to excessive blood loss, the officer succumbed to his injuries.

Lt Kanavdeep Singh displayed conspicuous bravery, exemplary courage, leadership in facing the terrorists, and made the supreme sacrifice in the highest traditions of the Indian Army.