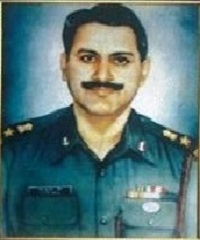 Lieutenant Colonel Harsh Uday Singh Gaur was born on 1st of July 1953 in Hardoi district of Uttar Pradesh. Son of Sri Rajendra Singh Gaur, Lt Col Gaur had undergone his earlier education in his hometown and later finished his graduation in 1972 from CM Nehru college. In September of 1973, he joined the Officers Training Academy (OTA) and was commissioned into the Bihar Regiment on 12th May 1974. After passing out from the Academy , he served in various operational areas in different units and formations.

An alumnus of the prestigious Defence Services Staff College (DSSC), Wellington, Lt Col Gaur also served as an Instructor in the infantry school. By 1994 he had put in about twenty years of service in the army and had evolved into a battle-hardened soldier and a fine officer. Later he was posted as the commanding officer of 10 Bihar battalion deployed at Baramulla district of  Jammu and Kashmir.

In 1994, Lt Col Gaur’s unit was deployed in Baramulla district of J & K and was engaged in counterinsurgency operations. Lt Col Gaur believed in leading from the front and would often lead the operations himself against the terrorists. On 29th November 1994, his unit received information from the intelligence sources about the presence of 10 to 12 terrorists in Bazipura village of Baramulla district. After analyzing the situation Lt Col Gaur planned a search and cordon operation in the suspected area. Keeping in view the expected scale of operation , Lt Col Gaur decided to lead the operation himself.  As planned the assault team cordoned off the area and launched the search and combing operation.

While the search operation was underway, at around 0700 hrs the terrorists fired at the troops triggering a gun battle.  Lt Col Gaur quickly redeployed his troops tactically so that all escape routes for the terrorists could be blocked. Despite heavy exchange of fire, he kept moving forward from a flank and reached close to the firing position of the mercenaries. Lt Col Gaur’s bold and unexpected action completely unnerved the terrorists and in the ensuing exchange of fire, he killed three terrorists. Later he went ahead to neutralize the Universal Machine Gun that was firing at him from behind a rock. With bullets flying all around him, he bravely crawled forward and lobbed a hand grenade at the gun position, killing yet another terrorist and silenced the gun. However during the fierce exchange of fire Lt Col Gaur got seriously wounded and later succumbed to his injuries. Lt Col Gaur was an exemplary soldier and an officer par excellence who inspired his troops by leading from the front.

The citation for Ashoka Chakra awarded to him reads:-

Lt Col Harsh Uday Singh Gaur was Commanding 10 Bihar which was deployed in J&K. On 29 November 1994, he received an information that 10 to 12 foreign mercenaries were hiding in Dazipura village of Baramulla district. He immediately organised a combing operation to flush out the mercenaries. While combing the area along with his Quick Reaction Team at 0700 hours, he came under heavy gun fire of the mercenaries. Lieutenant Colonel Gaur quickly readjusted two companies so that all escape routes could be blocked while he himself got down to neutralise the gun fire. Despite heavy exchange of fire, he kept moving forward from a flank and reached close to the firing position of the mercenaries. His bold and unexpected action completely surprised the mercenaries. In the ensuing exchange of fire, he killed three mercenaries. Later he went ahead to neutralise the Universal Machine Gun that was firing at him from behind a rock. With bullets flying all around him, he bravely crawled forward and lobbed a hand grenade at the gun position, killing yet another mercenary and silenced the gun. During the encounter, he himself was fatally wounded. The sacrifice made by him was an act of courage,beyond the call of duty that set an example of grit and dogged determination to fight the militants. For the daredevil act Lt Col Harsh Uday Singh Gaur was posthumously awarded.

A residential area for military personnel has been named as ‘Gaur Enclave’  in Lucknow Cantonment.