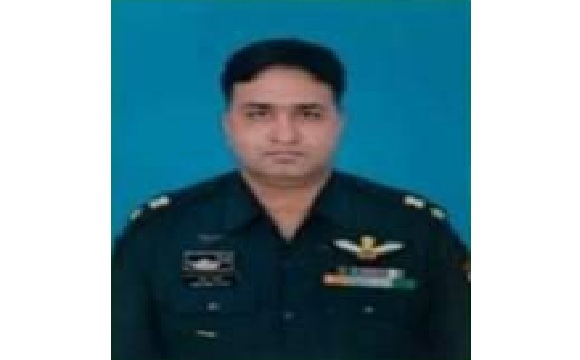 Lt Col Saurabh Yadav hailed from Rajasthan and was born in the year 1984. He was inclined to join the armed forces since his younger days and continued to follow his dream while growing up. Eventually he joined the Army after completing his education. After serving for some time with his parent unit, he got selected for flying training and was transferred to the Army Aviation Corps. He got trained as a helicopter pilot and completed his basic Army Aviation Course from Jhansi and Advance Army Aviation Course from Nahisk.

He soon gained proficiency in myriad air operations and became a QFI(Qualified Flying Instructor).  By 2022, he had been promoted to the rank of Lieutenant Colonel and developed into a professionally competent Helicopter pilot with expertise in various air operations.

During Oct 2022, Lt Col Saurabh Yadav was serving with 21 Recce and Observations Flight belonging to 667 Army Aviation Sqn (R&O). The 21 R&O Flt was operating a Cheetah helicopter, a single-engine helicopter, of 1970s vintage and derived from the French Alouette. The Cheetah Helicopter was known to be a high-performance helicopter designed for operation over a very wide range of weight, the center of gravity and altitude conditions. The five-seater Cheetah helicopter was versatile, multi-role, multi-purpose, highly maneuverable, and rugged in construction.  It was suitable for commuting, observation, surveillance, logistics support, rescue operations and high-altitude missions. On 5th Oct 2022, Lt Col Saurabh Yadav was tasked with one such air mission along with Major Mriddhul Agrawal as his co-pilot.

The crew took off in their Cheetah Helicopter to carry out the assigned task as per the operational plan. However on its return leg as Lt Col Saurabh Yadav's aircraft reached a forward area close to Tawang in Arunachal Pradesh, the Helicopter faced an emergency situation.  Arunachal Pradesh is considered to have some of the most difficult terrains in the country, throwing unexpected challenges to the pilots. The mountains and the rapidly changing weather conditions cause a huge number of air mishaps and casualties. The Cheetah Helicopter presumably developed a serious snag that the pilots could not rectify in time. Lt Col Saurabh Yadav and Major Mriddhul Agrawal were experienced pilots with substantial flying experience but they apparently did not get adequate time to bring the aircraft under control. Consequently, at around 1000 hrs, the aircraft crashed at Nyamjang Chu, near the BTK area in the Jemeithang circle of Tawang district. Both the pilots were evacuated to the nearest military hospital, but Lt Col Saurabh Yadav, who was critically injured, succumbed to his injuries during treatment.  Lt Col Saurabh Yadav was a valiant soldier and a competent pilot, who at the age of 38 years laid down his life in the service of the nation.

Lt Col Saurabh Yadav is survived by his parents, wife and his son.