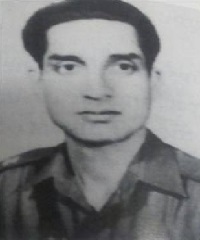 Lt Col Satish Chandra Joshi  hailed from Almora district of Uttarkhand and was born on 01 December, 1924. Son of Shri Jamuna Dutt Joshi, a teacher and Smt Manohari Devi Joshi, a homemaker, Lt Col Satish Chandra Joshi had two brothers and three sisters as siblings. He was commissioned into Army as a second Lieutenant on 24 Aug 1946 at the age of 22 years. He was commissioned into Central India Horse of the Armoured Corps, the important combat arm of Indian Army.

When Lt Col Joshi he was a young boy, his family was residing in Shahjehanpur, where they had close association with the family of revolutionary & freedom fighter, Shri Ram Prasad Bismil. Shri Bismil’s mother Smt Moolmati Devi had blessed young Satish Chandra to grow up to be like her son and win glory for the nation. During his student days he got influenced by the ongoing freedom movement at that time and took an active part   in it. Lt Col Satish Chandra Joshi while pursuing his graduation from the Benares Hindu University  was jailed and barred from entering Benares for participating in the freedom movement. He completed his graduation from Almora college and later joined the Army.  By 1965, he had put in over nineteen years of service in the Army and had been promoted to the rank of lieutenant Colonel.

During 1965, Lt Col Satish Chandra Joshi was commanding the armoured unit, Central India Horse(CIH) operating Sherman tanks. As the Indo-Pak war of 1965 broke out, CIH under the command of Lt Col Joshi was deployed on the western border under the operational control of 7 Infantry Division. As per the operational plan, 7 Inf Div with 48 Inf Bde and 65 Inf Bde along with CIH was to capture the Pakistani town of Barki about 24 Kms from Lahore. The plan was to be implemented in two phases with 4 Sikh battalion as the infantry element. Lt Col Joshi’s Sherman tanks were to lead the attack in an unorthodox manner with all lights on. They were given the task of advancing along the Khalra-Lahore road and providing close support to 4 Sikh.

Lt Col Joshi and his men provided valuable support to the battalion of the Sikh Regiment in capturing Barki on the night of 10th/11th September 1965. The enemy while withdrawing from Barki had scattered anti-tank mines all over. Thus the advance was temporarily held up the enemy mine fields. Sensing the gravity of the situation , Lt Col Joshi  himself went  forward and tried to find a detour round the enemy mines, but while doing so his tank was disabled by a mine. In complete disregard of  incessant heavy enemy shelling, he walked up to Barki and obtained a jeep from 4 Sikh. Thereafter. driving the jeep himself, he reconnoitered a passage through the mine fields on to the canal bank. However while doing so Lt Col Joshi’s jeep was blown up by the land-mine injuring him seriously. He later succumbed to his injuries and was martyred.

Lt Col Joshi  was a valiant soldier and a gritty ‘Commanding Officer’ who led his troops from the front like a true military leader. Lt Col Joshi  was given the gallantry award, “Vir Chakra” second time for his dauntless courage, exceptional leadership and supreme sacrifice. Lt Col SC Joshi had earlier been given ‘Vir Chakra” in 1948 for his gallantry during the Indo-Pak war of 1947-48.

The citation for the “Vir Chakra” awarded to him in 1965 reads:

Lieutenant Colonel Satish Chandra Joshi, commanding officer, Central India Horse, was given the task of advancing along the Khalra-Lahore road and providing close support to a battalion of a Sikh Regiment for the capture of Barki. Afterwards continuing his advance with a battalion of a Punjab Regiment to the east bank of Ichhogil canal , under directions his men provided valuable support to the battalion of the Sikh Regiment in capturing Barki on the night of 10th/11th September 1965. Thereafter, his advance was temporarily held by enemy mine fields. Lieutenant Colonel Joshi himself went  forward and tried to find a detour round the enemy mines, but while doing so his tank was disabled by a mine. In complete disregard of  incessant heavy enemy shelling, he walked to Barki and obtained a jeep. Driving the jeep himself, he reconnoitered a passage through the mine fields on to the canal bank. Inspired by his act, the tank crew gave excellent support to the infantry in the successful completion of its mission. Lieutenant Colonel Joshi was severely wounded in the action, when his jeep blew up on a mine and died later.

The citation for the “Vir Chakra” awarded to him in 1948 reads:

Lieutenant S.C. Joshi was the young subaltern with Central India Horse deployed in J&K in 1948. He displayed numerous acts of bravery and showed dash and courage of the highest order. First on 8 April 1948, while withdrawing to an important place, he came under heavy enemy fire for the first time in his life. Despite his lack of experience, he carried out the task most courageously. On 1 May 1948 while under continuous mortar fire, he helped the Engineers to clear a roadblock. Then he maneuvered his tank troop over difficult terrain and continued his advance till the object was captured.

On 10 May 1948, he displayed excellent tactical sense while helping an infantry battalion to withdraw after its attack had been stalled by the enemy. On 14 June 1948, he evacuated two badly wounded jawans in his tanks and with complete disregard to his own safety.