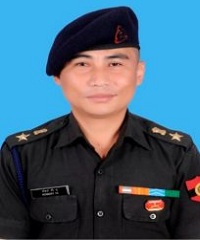 Lt Col Robert TA hailed from Maram Center village in Senapati district of Manipur and was born on January 24, 1981. Son of Shri Thoiba Angelus and Smt K Karaila, Lt Col Robert was the eldest among eight siblings. He joined the Army in the year 2004 at the age of 23 years and became the first person from the Maram Naga community to don the Army uniform as an officer. He joined the Army through the Technical Entry Scheme (TES) examination and was commissioned into the Corps of Engineers, an important combat support arm of the Indian Army.

Besides being a committed soldier, Lt Col Robert was a keen sportsman and excelled in various sports including football. During his training days he was called “Ronaldo” by his course-mates a name kept after the famous football player. In 2008, Lt Col Robert was awarded the Vice-Chief of the Army Staff Commendation after his squad under his leadership as a captain completed in the prestigious Army Adventure Challenge Cup and emerged as the winner. He got promoted to the rank of Lt Col in the year 2017 and by 2020 had put in around 16 years of service after having worked in various operational areas.

During 2020, Lt Col Robert’s unit was deployed in North Sikkim near the Indo-China border. The AOR(Area of Responsibility) of the unit spanned over remote rugged mountainous terrain with extreme weather conditions specially in the winter season. The troops were deployed on various forward posts and often undertook patrol to monitor the area in between the manned posts. Also heavy snow fall often blocked the roads and hampered the movement of troops which necessitated frequent clearance operations. Lt Col Robert was leading one such patrol cum snow clearance team comprising three officers and 18 other soldiers on 14 May 2020 in Lugnal La region of North Sikkim.  As the troops were traversing through the planned route, a horrific avalanche struck them.

The magnitude and suddenness of the avalanche did not give any time to the team to take any evasive actions. As a result Lt Col Robert and his comrades got trapped under tons of snow. A massive rescue operation was launched jointly with the elements of Army, Indian Air Force and ITBP. The rescue team eventually managed to extricate a number of soldiers but Lt Col Robert and Sapper Sapala Shanmukha Rao lost their lives owing to prolonged exposure to extreme cold conditions. Lt Col Robert was a committed soldier and a fine officer who laid down his life in the line of his duty.

A Tribute by one of his comrades:

‘Lt Col Robert TA was the name given to our brother in arms. We knew him as ROBO. ‘

The short guy from Maram in Manipur, the quiet guy who made it in spite of humble roots. He was the most loved amongst us all. One could simply miss him in a room, so quiet was his demeanor and so gentle were his ways but give him a football and you can only but chase the dazzling footwork and precise kicks. The world would fall down at his feet and praise when he kicked and played Football.

He was the little Ronaldo from Maram.

But that was not all, he sang like there was no tomorrow. You will be mesmerised by his guitar skills as well. Together, we spent years trying to get through the rigors of military training; From one meal to the next and one sleep to the next, Robo never did mind. He knew, he was meant to be officer of the Indian Armed Forces and a remarkable one at that. Commissioned into the Madras Sappers, the officer and gentleman rose to every fight, every operation and lived by a simple motto –

Robo was right there when the snow storm closed the roads. He knew, it wasn’t just a road, it was a life line for all across. He lead his team which followed him happily and with pride. As the snow caved in, Robo did what he knew best. He came between death and his team and simply took a red card for the team.

He leaves a family and his band of brothers alone on the pitch. He will be missed. Every time a football would touch the fields of Cadets Training Wing, his name will echo. Although no sculptured marble should rise to his memory, nor engraved stone bear record of his deeds, yet will his remembrance be as lasting as the land he honored.Like many that gave up their lives for this motherland. We do not know one promise these men made, one pledge they gave, one word they spoke; but we do know they summed up and perfected, by one supreme act, the highest virtues of men and citizens. For love of country they accepted death, and thus resolved all doubts, and made.