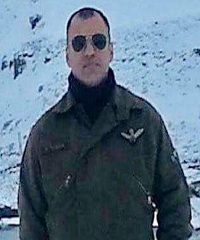 Lieutenant Colonel Rajneesh Parmar hailed from  Nanao village in Sulah area of Kangra district in Himachal Pradesh. Born on 27th Sept 1976, Lt. Col Rajneesh came from a military family wherein his father JWO Mukhtyar Singh (retired) served in the Indian Airforce, and his younger brother Nikhil Parmar is also serving as a Lieutenant Colonel in the Indian Army. Lt. Col Rajneesh wanted to join the armed forces right from his childhood and follow into the footsteps of his father. Following his dream, he got selected to join the army through Combined  Defence Services Examination and joined the Indian Military Academy in 2000.

He got commissioned into the Army Aviation Corps and got trained as a helicopter pilot. By 2019, he had put in around 19 years of service and developed into a professionally competent Helicopter pilot with expertise in various air operations.

During Sept 2019, Lt. Col Rajneesh Parmar was serving with 28 R&O Flt belonging to 667 Army Aviation Sqn. The squadron was operating single-engine Cheetah Helicopters and was based in Misamari in Assam. As a part of an arrangement between India and Bhutan, Bhutanese pilots had been training with the Indian Army since 2014-15. Lt. Col Rajneesh was serving as an Instructor to Bhutanese pilots as part of the existing arrangement. On 27th Sept 2019, Lt. Col Rajneesh was tasked for an Air-Mission along with Captain Kalzang Wangdi from Royal Bhutan Army.

After completing the task with the Indian Military Training Team (IMTRAT), Lt. Col Rajneesh and Capt Kalzang took off again to return to Bhutan. As the Helicopter was en-route from Khirmu in Arunanchal Pradesh to Yongfulla in Bhutan, it developed serious snag which the pilots could not rectify in time.  Lt. Col Rajneesh was an experienced pilot with substantial flying experience but did not get adequate time to bring the aircraft under control. Consequently, the cheetah Helicopter crashed and the aircrew could not survive the crash. Lt. Col Rajneesh was a committed soldier and a fine officer who laid down his life in the line of his duty on a day which unfortunately happened to be his birthday.