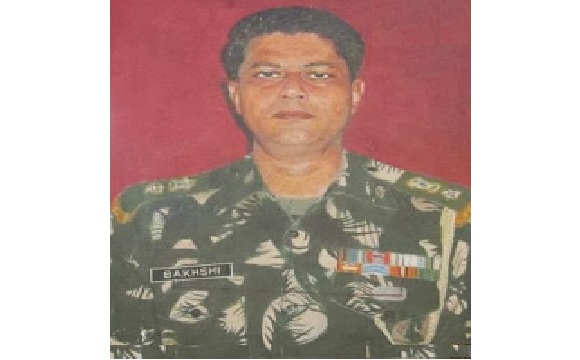 Lt Col Rajeev Bakhshi was born in New Delhi on 10 March 1967 into a military family hailing from Punjab. Son of an army veteran Lt Col JML Bakhshi and Smt Usha Bakhshi, he had a brother Rajesh and sister Ranjana as his siblings. Ever since his childhood days, he was interested in reading adventure books and comics and was inspired by the life of Bruce Lee and Arnold Schwarzenegger. He loved reading commando comics and joining the army was his dream. During school days, he was an outstanding cadet in National Cadet Corps and also participated in the Republic Day Parade in a marching drill contingent.  At school, he actively participated in co-curricular activities and sports. He even represented his school at Inter-state level in cricket, football and badminton. He also learnt music and played the guitar very well.

He initially went to St Edwards School, Shimla in Himachal Pradesh and later, studied in SD Model School, Jallandhar in Punjab. Subsequently he completed his Bachelor of Commerce (Honours) degree from Jodhpur University and also enrolled for Indian Cost and Works Accounts (ICWA) in 1988, when an incident that occurred during the IPKF (Indian Peace Keeping Forces) Operations in Sri Lanka impacted his mind.  One day at 10 Parachute Commando Battalion located in the cantonment area in Jodhpur, he along with his college friends witnessed the entire ceremony of homage being paid to martyrs in IPKF operations by military personnel attired in ceremonial uniforms.  He was unable to sleep well at night and kept thinking of the valour, courage and bravery of the martyrs in IPKF operations in Sri Lanka.  This was the time, he and his brother got inspired to join the Indian Army and began their preparation for the Combined Defence Services (CDS) examination.  Eventually he got selected for the "Officers Training Academy" in Chennai and joined the No.51 Short Service Commission Course.  He was commissioned as a Lieutenant into 13 Dogra battalion of the Dogra Regiment, an infantry Regiment well known for its dauntless soldiers and numerous battle exploits. Incidentally this happened to be his father's battalion, which he had commanded in 1973-74 at Nagaland.

Soldiering came very naturally to the young Lt Rajeev Bakhshi as he came from a family with a glorious tradition of military service. A third generation officer, his grandfather Major ID Bakhshi too had served in the Indian Army. After his commissioning, his first field posting was in Pallanwala in Jammu and Kashmir, where he served on the line of control for more than two years. Lt Rajeev Bakhshi, soon evolved into a committed soldier and a fine officer with superior field-craft skills. Besides being a tough soldier, he was very affable and caring which endeared him to his peers and subordinates as well.  An outstanding sportsman, he was a good swimmer, cricketer and excelled in badminton and basketball too. After putting in few years of service, he got married to Ms. Nandita on 01 Dec 1994 and the couple had two daughters Aarzoo & Aamanat. By 2006, he had put in around 15 years of service and had been promoted to the rank of Lieutenant Colonel.

During 2006, Lt Col Rajeev Bakhshi's unit 13 Dogra was deployed in Tipaimukh area of Manipur. In the mid 2000's, more than 8,900 square kilometers of Manipur was under the control of the militants and the state government was in no position to enforce its will or the rule of law. This so called 'liberated area' covered about 9 subdivisions of the state, inclusive of the whole of Churachandpur district (5 subdivisions), the areas of Tamenglong district starting from Barak bridge to Jiribam (along the national highway), from Chapikarong to the international border in Chandel district, Loktak Lake, and the areas beyond Moirang upto the southern hill slopes of Churachandpur district. In order to tackle this problem a Combined Headquarters was formed to function under the Chief Minister with the Chief Secretary, Corps Commander (Indian Army), GOC, 57 Mountain Division (Leimakhong), IGAR (S) Assam Rifles, IGP CRPF, Jt. Director of Intelligence Bureau.

Under this security arrangement, the Indian Army launched a number of operations against the extremist organizations operating in Manipur, starting from the year 2004.  The major operations included - Operation All Clear (2004), Operation Jawala (2004), Operation Stinger (October 2005), Operation Tornado (October 2005) and Operation Dragnet (January 2006). Lt Col Rajeev Bakshi’s unit got involved in the operations as part of Operation Dragnet. The objective of the operation was to clear & secure the two sub-divisions of Tipaimukh (Parbung) & Thanlon, from the stranglehold of the militant organizations. Tipaimukh was located in the extreme corner of Manipur adjoining the state of Mizoram.

On the 20th of Jan 2006, Lt Col Rajeev Bakhshi's team went in for Parbung, to rescue and secure the area from the grasp of the militants. The militants, who were holed up in the village, were taken aback by the swift & brutal attack. The militants were caught off-guard, who panicked and started firing indiscriminately at the troops. A fierce encounter ensued thereafter with heavy exchange of fire. Lt Col Rajeev Bakhshi leading his troops courageously used his superior soldierly skills to pin the militants down. But in the operation Lt Col Rajeev Bakhshi got critically wounded, and was evacuated by an Army Helicopter to the 160 Military hospital, Masimpur, Silchar, Assam. He however succumbed to his injuries was martyred. It is said that the last command he gave to his men, before he lost consciousness, was that they should never abandon the villagers/the people of Parbung under any circumstances.

Inspired by Lt Col Rajeev Bakhshi, his unit officer Lieutenant Pant took over the command of the operations, and fought with great vigour. They stormed the area known as Church Hill in Parbung village and managed to eliminate 15 militants including the area commander of the militants. The operation marked the culmination of 16 months of relentless offensive to purge South Manipur of insurgents. Lt Col Rajeev Bakhshi was a valiant soldier and an officer par excellence who led from the front and laid down his life in the line of his duty following the highest traditions of the Indian Army. Lt Col Rajeev Bakhshi was given the gallantry award, “Sena Medal” on 15 Aug 2006 for his commendable courage, leadership and supreme sacrifice.