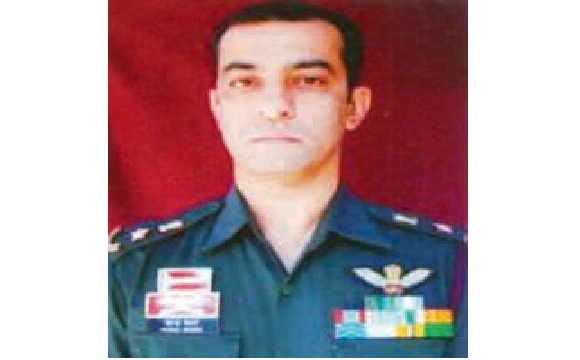 Place of birth : Bareilly, UP

Lt Col Paras Mehra hailed from Bareilly district in Uttar Pradesh and was born on 17 Sep 1968.  Son of an Indian Air Force pilot Wg Cdr KL Mehra, Lt Col Paras was inclined to join the armed forces since his younger days and continued to follow his dream while growing up. Eventually he joined the Army after completing his education and was commissioned as a Lieutenant in June 1993 at the age of 24 years. He was commissioned into the 14 Mahar Battalion of the Mahar Regiment, a regiment of the Infantry known for its fearless soldiers and numerous battle honours.

After serving for some time with his parent unit, he got selected for flying training and was transferred to the Army Aviation Corps. He got trained as a helicopter pilot and completed his basic Army Aviation Course from Jhansi and his Advance Army Aviation Course from Nahisk. In the year 1997, he got married to Ms Rajana and over the years the couple was blessed with two sons. He proved his mettle as a helicopter pilot and got selected to fly an MI-35 attack Helicopter. He served with an MI-35 attack Helicopter unit for four years. He also served in Ladakh area with an Army Aviation Sqn (R&O) and undertook a number of logistics support, rescue and high-altitude missions. Thereafter he joined back his parent unit after serving for some years with the Army Aviation Corps.  By the year 2007, he had been promoted to the rank of Lt Col and evolved into a fine officer, who commanded the respect of his juniors and peers as well.

During Feb 2007, Lt Col Paras Mehra's unit 14 Mahar Regiment was deployed in Manipur for counter-insurgency operations as part of "Operation Hifazat".  The AOR(Area of Responsibility) of the unit was prone to random attacks by the insurgents and demanded a high level of alertness from the soldiers. During the early part of 1997, there had been increased militant activity in the border region of Manipur, and in response to this, the Army and paramilitary forces had been conducting coordinated operations along the unfenced border between Manipur and Myanmar. In Feb 2007, Lt Col Paras Mehra was functioning as the officiating Commanding Officer and Second-in-Command of the unit. On 10 Feb 2007, the unit under the leadership of Lt Col Paras Mehra planned an alert exercise in its AOR in Chandel district of Manipur.

In the early morning of 10th Feb 2007, when the exercise was underway, a suspicious movement was observed on the ridge in Lower Bongjoi post of 14 Mahar at about 7.20 am. The area was known to have poor visibility conditions most of the times owing to the thick vegetation of the dense forest.  Lt Col Paras Mehra who was present near the AGL post directed his soldiers to fire in that direction. While the first round went to the intended direction, the second round hit a twig probably and burst on impact.  As a result, a splinter of the grenade hit Lt Col Mehra near the armpit, bypassing his bulletproof jacket and causing serious injury. An immediate rescue operation was launched and a helicopter was requisitioned to evacuate the injured Lt Col Mehra. However before he could be airlifted, he soon succumbed to his injuries and was martyred.  Lt Col Paras Mehra was a gallant soldier and gritty officer, who led from the front and made the supreme sacrifice in the line of his duty.