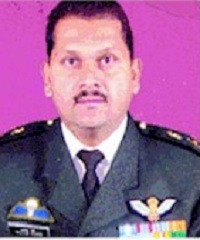 The charred bodies of Lt Col PK Pande, Major General D P Singh, who is GOC of Six Mountain Division, and the pilot Captain Arjun Sardana were found by a rescue team of Indo-Tibetan Border Police, near the Manna Pass near Sino-Indian border.  An army aviation helicopter landed near the crash site and brought all the three bodies to Joshimath.