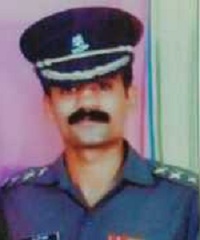 Lt Col Natraj Vijay Raghavan hailed from the Chennai district of Tamil Nadu and was born in the year 1961. Son of an army veteran Brigadier NV Raghavan and Smt Vatsala V Raghavan, Lt Col N V Raghavan grew up in Army cantonments with a dream to follow the footsteps of his father and don the olive green uniform. Eventually, he joined the Army and was commissioned into 15 Kumaon of the Kumaon Regiment, an infantry Regiment well known for its intrepid soldiers and various battle exploits.

He got commissioned on 12 June 1982 and within just one and a half years of service, he was awarded the “Sena Medal” for his distinguished service and devotion to duty. He was also a part of Operation Bluestar and proved his mettle as a soldier. Later, he served in the North East in Nagaland and participated in numerous counter-insurgency operations. Lt Col Raghavan also served in IMTRAT, Bhutan, for which he was awarded the Videsh Seva Medal in 1994 besides the Sainya Seva Service Medal with Clasp J&K in 1988 and SSM 1965 with Clasp Nagaland in 1994.

During his seventeen years of service Lt Col NV Raghavan had a very illustrious career with tenures at IMA, IMTRAT, and HQ Arunachal and Assam Range. A National Squash Player and winner of the Andhra Pradesh Open championship, Lt Col NV Raghavan while in the National Defence Academy was Captain of the Squash team and at both the NDA and IMA played for the Academy. After serving for a few years got married to Ms. Subhadra and the couple had a son Anil and daughter Puja.

During the year 1999, Lt Col N V Raghavan was serving with 15 Kumaon battalion deployed in the Kupwara district in Jammu and Kashmir. The unit troops were engaged in operations against the militants in its AOR(Area of Responsibility) as part of the ongoing Operation Rakshak. As the Kargil war broke out and Op Vijay was launched by the Army, there was a spurt in the terrorist activities. Lt Col N V Raghavan  and his unit soldiers were maintaining a very high state of alert with aggressive patrolling of the area. The unit’s AOR was close to the LOC and was very prone to infiltration by the terrorists from across the border. In June 1999, a report of one such infiltration attempt in Machhil sub-sector of Kupwara district was received wherein 8 militants had sneaked from across the LOC and holed on a 12000 feet high feature.

A decision was taken by the unit to launch an operation to foil the infiltration bid and neutralize the infiltrators. Lt Col NV Raghavan was tasked to lead the operation who immediately swung into action along with his men and launch the search and cordon operation on 18 June 1999 which happened to be his birthday. In the first encounter that took place on 21 June, Lt Col Raghavan deployed his troops tactically to block the escape routes of the terrorists and kept directing the fire to pin them down. Lt Col Raghavan and his men eventually managed to eliminate four militants in the operation. On 24 June again local sources informed about the presence of two militants and Lt Col Raghavan once again launched the operation along with his unit officer Capt Vishal Behl to ambush the infiltrators. Lt Col Raghavan neutralized one militant by 0345 hrs  but just then he saw another militant hiding behind a boulder and decided to take him on.

He directed his soldiers to give him cover fire and lunged towards the hiding militant. However while doing so he received gunshot from the militant and got seriously injured.  But despite being severely wounded he kept on moving forward and eliminated the second militant too before collapsing. Lt Col N V Raghavan later succumbed to his injuries and was martyred. Lt Col NV Raghavan was a valiant soldier and a gritty officer who led from the front and laid down his life in the service of the nation. He was given the gallantry award, “Shaurya Chakra” for his courage, indomitable spirit, and sacrifice.