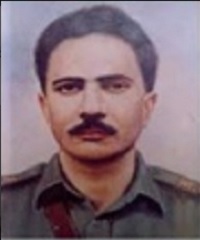 Lt Col Narindra Nath Khanna was born on 20th May 1928, at Larkana of Pakistan. Son of Shri ML Khanna, Lt Col Khanna had his earlier education from Shivaji School at Pune. His family later settled down in New Delhi. Lt Col Khanna later joined NDA in Khadakwasla and was commissioned into Indian Army at the age of 19 years. He was commissioned on 12 Sep 1948 into the Sikh Regiment, an infantry regiment known for its valour and various battle honours.

By 1965, Lt Col Khanna had put in about seventeen years of service in the army and had worked in various operational areas facing challenging conditions. He went on to become the Commanding Officer of 2 Sikh and played a key role in the Uri sector during 1965 war.

During 1965, Lt Col Khanna’s unit 2 Sikh was deployed in the Uri sector of J & K. As part of an operation plan to link up in the Uri-Poonch bulge, 2 Sikh battalion was tasked to attack the  Raja picket across the cease-fire line on 5 Sep 1965. The approach to the given objective was very difficult and had a steep gradient for the last 200 meters. The picket was heavily mined and was strongly held by the enemy troops. Having assessed the ground situation, Lt Col Khanna made an aggressive plan using his three companies. As planned Lt Col Khanna and his soldiers launched the attack on the picket at 0400 hrs on 6 Sep 1965.

The troops of 2 Sikh came under devastating fire as soon as they crossed the start line. Unnerved the companies still managed to reach the wire obstacle, but the further advance was difficult. The two assaulting companies faced stiff resistance from the enemy forces and were pushed back. Meanwhile, Lt Col Khanna was injured in the right shoulder by grenades splinter but Lt Col Khanna a battle-hardened soldier and an inspiring Commanding Officer decided to move up along with his men. He encouraged the two assault companies to move on and led the attack himself with grenades in his hand. During this assault, Lt Col Khanna got browning burst in his stomach and was seriously injured. Lt Col Khanna’s troops however inspired by their Commanding Officer moved forward bravely and captured the objective. Lt Col Khanna later succumbed to his injuries and was martyred.

The citation for the Maha Vir Chakra awarded reads him:

On 6 September 1965, Lieutenant Colonel N .N. Khanna, Officer Commanding, 2 Sikh, made an assault on Raja picquet with three companies. It was a well-fortified enemy defended locality across the cease-fire line in Jammu & Kashmir. His companies came under heavy automatic and fixed-line fire from medium machine guns and Brownings, apart from many other light automatic weapons. Two of assaulting companies were pushed back and pinned down by the heavy fire. Though himself wounded by an enemy grenade, Lieutenant Colonel Khanna inspired the two companies with words of courage and personally led them in another assault which succeeded in capturing the objective.

Whilst leading the final assault, he was mortally wounded by a burst from a Browning and succumbed to his injuries later. But for Lieutenant Colonel Khanna’s courage, determination and inspiring leadership, this enemy stronghold would not have been captured. His act of supreme sacrifice was in keeping with the highest traditions of the Army.