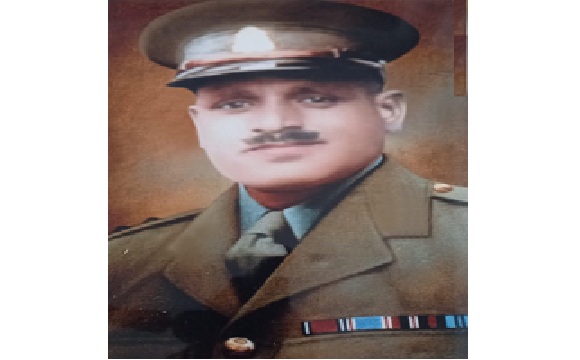 Lt Col Narain Singh Samyal hailed from Samba district of Jammu & Kashmir and was born on 11th March 1907. Son of Shri Hera Singh, he completed his schooling at Boys High School, Samba in J&K. After completing the studies he got selected to join the J&K State forces and and became an officer in the year 1924 at the age of 21 years. He was commissioned into the 7 JAK battalion of the Jammu and Kashmir State Forces. He soon developed into a fine officer with commendable soldierly skills.

As part of the allied forces, he participated in the second world war during the Burma campaign. On his return, he presented the sword from the war trophies captured from the Japanese Army to Maharaja Hari Singh at Badami Bagh Cantt. He also had the distinction of being the first officer of British Indian army, getting selected for the prestigious Staff College in Quetta (Now in Pakistan). After serving for a few years, Lt Col Narain Singh got married to Ms Lilawanti and the couple had four sons Jaswant, Sumant, Kulwant & Jagwant and daughter Sharmishtha. By the year 1947, he had put in over 20 years of service and had been promoted to the rank of Lt Col. After the accession of the J&K state to the Indian Union in October 1947, the State Forces came under the command of the Indian Army.

During October 1947, Lt Col Narain Singh was 4 JAK battalion of the J&K State Forces comprising of two Dogra companies and two Muslim companies. When Pakistan launched ‘Operation Gulmarg’ to annex Kashmir, he was ordered by the Maharaja to march to Muzzafarabad via Domel to defend Kashmir. What was feared was the lacuna in the constituency of the troops which also comprised of Muslim soldiers from the Poonch-Mirpur area. When he was asked by the Maharaja whether he trusted the Muslim troops, he vehemently stated, “more than dogras” and protested that it would be an insult to his battalion, a typical Hindu Dogra response of a high bred military officer. With the complete violation of the standstill agreement signed between the Maharaja and the state of Pakistan around 5000 tribals with the support of the Pakistani army invaded Kashmir.

The invasion finally began on night 22 October along Road Abbottabad-Manshera-Muzaffarabad-Domail-Uri- Srinagar. Similar incursions were made towards the North and South along the border towards Kupwara, Gilgit and Poonch and Mirpur. The two companies and battalion headquarters of 4th Battalion were guarding this axis with the other two companies deployed on the flanks to the North & South at Keran and Kohala respectively. Lt Col Narain Singh's battalion troops were battle-hardened, but the revolt by Muslim troops of the battalion made the job of the invaders easy. The company at the border could not give adequate fight due to the Company Commander joining the invaders. Consequently the invaders reached Muzaffarabad, where Lt Col Narain Singh with a company at Domail, offered some resistance but were again let down by their Muslim colleagues. Thereafter Lt Col Narain Singh accompanied by a few men started to move to join the company in Kohala. However subsequently he was declared missing in action. The gallant actions by Lt Col Narain Singh and his troops delayed the invaders march and provided the much needed time for other forces to get organized. Lt Col Narain Singh was a valiant soldier and gritty officer, who led from the front and laid down his life in the service of the nation.