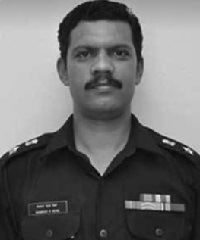 Regiment: The Corps of Engineers

Lt Col Mandar joined the NDA in June 1993 and passed out in 1996 to join the Indian Military Academy,Dehradun. He was commissioned into the Corps of Engineers (Madras Sappers) in 1997. By 2010, Lt Col Mandar had put in 13 years of service and had served in various places with different terrain and operational conditions. He was a committed soldier, who was known for his professionalism and dedication to service. During 2010, Lt Col Nene’s unit was deployed in Tawang area in the North East sector.

On 19th November 2010 ,the fateful day, Lt Col Mandar Nene was on-board an “air-maintenance” sortie on  Mi-17 around Tawang area which is  located about 9,000 feet above the ground at Chinese border . “Air-maintenance” refers to helicopter-aided support of forward army posts on the China frontier, at altitudes of 8,000ft to 14,000ft where winds are high and oxygen density is almost 30 per cent lower, and where supplies are either para-dropped or the helicopters make touch-and-go landings.

The ill-fated Mi-17 helicopter crashed near the China frontier on a wooden hillock at Tepsha village near Bomdir area, about 6km from Tawang, from where it had taken off, at about 12:04pm, leaving no survivors. The counter-Maoist operation chopper, was seen to blast mid-air as per some eye witnesses. This was the second time a plane had crashed mid-air on China frontier in the same year. Lt Col Mandar Nene was among the 12 soldiers who lost their lives in this horrific accident.