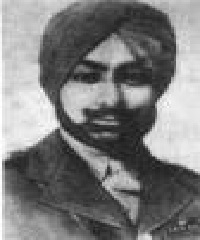 Lieutenant Colonel I J S Butalia was born on 12th Feb 1911. Son of Shri Iqbal Singh, Lt Col I J S Butalia was commissioned on 31 Jan 1937, into the Dogra Regiment, a Regiment known for its intrepid soldiers and numerous battle exploits. By 1948, Lt Col Butalia had put in about 11 years of service and had evolved into a committed soldier and a fine officer. Before taking over as the first Commanding Officer of 4 Dogra battalion, he served in various operational areas with different terrain and working conditions.

During Feb 1948, Lt Col Butalia’s unit 4 Dogra, also known as “Char Satara”, had been moved to J&K to fight off the Pakistani invaders who had attacked Kashmir and thereby posed a grave threat to the security and integrity of India. Here, as a part of 19 Independent Infantry Brigade, the battalion participated in a series of operations over the next ten months. The battalion played crucial role in the battles of Kalal, Chawa, Jhangar and Barwali Ridge. Lt Col Butalia proved his mettle as a gallant soldier and military leader in the battle of Kalal. In this battle ,On 22nd Feb 1948, Lt Col Butalia was assigned the task of covering the withdrawal of 19 (I) Infantry Brigade without any artillery support.

Lt Col Butalia deployed his troops to provide right flank protection to 1 Kumaon battalion which was advancing to Kalal village. He himself supervised the withdrawal of two pickets of the infantry battalion when the enemy was closing on them. During the battle, Lt Col Butalia was seriously wounded by the heavy firing with his left hand having completely blown off. Undeterred, he refused to be evacuated and continued giving directions to his troops. Later he succumbed to his injuries and was martyred. Lt Col I J S Butalia was a gallant soldier and an office par excellence, who laid down his life in the service of the nation.  He was given the nation’s second highest gallantry award ” Maha Vir Chakra” posthumously for his cold courage, unfaltering leadership and supreme sacrifice.

The Citation of Maha Vir Chakra awarded to him reads:

On 22 February 1948, Lieutenant Colonel I.J.S Butalia, Commanding Officer 4 Dogra, was assigned the task of covering the withdrawal of 19 (I) Infantry Brigade without any artillery support. He carried out the withdrawal successfully and personally supervised the lay back. He gallantly withdrew two pickets of an infantry battalion when the enemy was closing on them. He was seriously wounded by the enemy heavy firing and his left hand was completely blown off Undeterred, he refused to be evacuated saying that a few like him could be sacrificed for the duty assigned to him. He bravely carried the withdrawal of the rearmost party where he himself was.

Lieutenant Colonel Butalia showed selfless devotion to duty and a fine example of leadership, which led to the success of the operation.